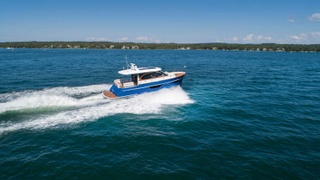 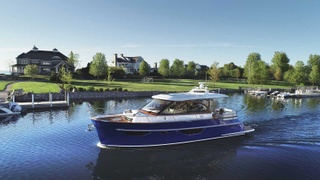 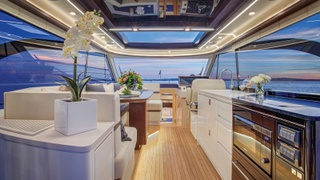 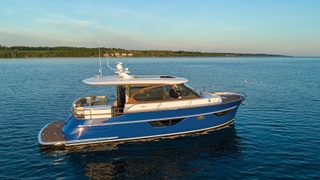 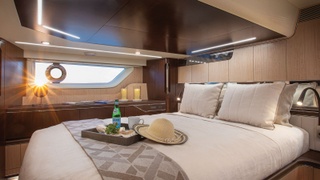 Free at last – nothing but clear, flat water and pale blue sky surrounds the boat. Seated at the helm of the Burger 48 Cruiser, I have both hands on the wheel but it’s hardly necessary. Under the power of the 600hp Volvo Penta engines purring somewhere below the salon’s maple sole, the boat traces a perfect line, scarring the surface of Lake Michigan with a widening V. I glance at the 17-inch Garmin displays in front of me and am surprised to see that the boat is going 30 knots.

This Burger 48 Cruiser, hull 512, is the sistership of Blue Boat Home, which was born of a chance encounter on this very lake. The vice president of sales and marketing for Burger Boat Company, Ron Cleveringa, was out boating when he met the woman who would inspire its build. She was swimming near her boat when they began chatting.

“I was still neck deep in water when I found out that Ron is a naval architect and works for Burger,” she remembers. She had heard about Burger since she was a child and had enjoyed the same boat, an Apreamare, for 12 years. When he told her that, yes, they could build her a boat around 12.1 metres, she made a quick decision. “Within 90 seconds I was just about committed.”

She did some homework but was back in touch with Burger within days. “The very first thing I told them was that [the boat] had to be beautiful; it had to be absolutely up to date in terms of technology, engineering and design and it had to be easy to run and care for,” she says.

Burger brought in Dutch design firm Vripack to assist with the exterior design, layout and naval architecture. An early and easy decision was the type of power they’d use. “Since [the owner] wanted to be able to go 30 knots and wanted a boat that was easy to handle, IPS made sense,” Cleveringa says. Another quick decision was the hull type.

Vripack had a patented design for what it calls its Slide Hull, designed primarily for boats that shuttle crew to and from off-shore platforms in the North Sea. Although Blue Boat Home will remain on the Great Lakes (her owner describes herself as “a freshie”), it does not mean it won’t be subjected to tough conditions. In fact, when she took delivery of the boat, she says, “It was six- to eight-footers (1.8m - 2.4m) for a short term on Green Bay and it was kind of hairy and very wet. But there was never a moment when the boat disappointed me. I never felt unsafe.”

Peter Bouma, naval architect for Vripack, describes the Slide Hull motion on waves as a “heave up and down” with noticeably less pitching. I’ll have to take his word for it because on this day, there is hardly any heeling in turns and no heaving, pitching nor rocking. It feels like the boat is gliding on skates across the silvery lake. The roll angle graph tracking the motion of the Seakeeper 6 gyrostabiliser that Burger added on hull No 2 is pretty much a flat line.

It gives plenty of confidence to gaze at the scenery and wispy clouds strewn across the sky fully visible through the large sunroof. A breeze blowing across the cabin from open side windows adds to the sheer delight of open water. One of the fringe benefits of the Slide Hull design that I am able to appreciate is the space. Because of the hull shape, the interior is built slightly higher within the hull, above the chines. This translates below to two large cabins and two bathrooms with full-size shower, toilet and vanity.

As we slowly motor in the channel leading to Charlevoix, Michigan, I watch pedestrians look at the pretty blue hull passing by. The style is described as retro modern with hints of the Burger heritage. The detailing on the outside of the house echoes the varnished boats of years past without being too onerous in terms of maintenance, says Pim Dijksman, yacht designer at Vripack.

An enclosed main deck made sense for the owner of Blue Boat Home, who wants to be able to stretch the boating season from early spring to late fall, and the extra space and volume is quite desirable and very much on trend. And there are still good spaces outdoors. Seating is up front while a comfortable banquette and table look over the articulated swim platform that supports an 11ft BRIG tender. The platform is also large enough to accommodate a couple of chairs, and a grill is nearby to cook fish right out of the lake. For added serenity so close to the water, Burger installed Volvo Penta’s Clear Wake Exhaust System, which effectively removes gurgling and bubbles when the boat idles.

The interior decor of hull 512, recently named BLUE, is by De Basto Designs. Luiz de Basto, who also has far larger boats to his credit (see 90 metre DAR, for instance), wanted the interior to look and feel as luxurious as a superyacht, but, he says, because the spaces were smaller he looked for inspiration among luxurious sedan cars from Rolls-Royce, Mercedes and Bentley.

The decor includes a wealth of details from stitched handles to what looks like ostrich leather on the headboards – it is, in fact, Majilite, which is at once more cost effective and easier to maintain, Cristina de Basto says. The bright light veneer on bulkheads is Movingui with dark walnut for contrast.

The galley (complete with small dishwasher) is self-contained in a bar stretching opposite a dining table with banquette seating. The table is cleverly designed with built-in storage for glasses inside the base and a sliding top to ease access. Accents in stainless-steel finish the furniture beautifully. Luiz de Basto designed the whole interior in 3D and Burger perfectly executed the exacting details.

Back at the dock, the boat slides neatly into its space while the attendants grab the lines in one swift motion. The covers come out of their storage and quickly snap into place. All that’s left to do is to grab a refreshing drink. That’s the beauty of freshwater, Cleveringa says, “no need to wash the boat.” Yes, it feels like freedom.