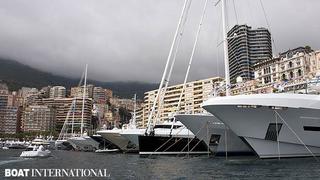 Review of the 2013 Monaco Yacht Show

Now that the euphoria and hype of last week's Monaco Yacht Show are over, it's time to poll exhibitors for their comments – and reactions are mixed.

Philippe Hetland Brault, CEO of Yachting Partners International says, 'This year’s event was particularly special for us as we not only presented YPI parent company, Barry Rogliano Salles (BRS) Shipping for the first time but we were able to go into the event announcing the sale of the 27.4m IFA Cannes and ended it with news of the sale of the amazing 73m Red Square, built by Dunya Yachts. In summary, a very exciting and successful show for YPI, for at least two of our clients and indeed the industry as a whole.'

Over now to Kevin Merrigan, president of Northrop & Johnson: 'The Monaco show had much more energy than in the last few years. We made several offers on yachts and quite a few have gone under agreement. Felicita West, the 64m Perini Navi, had a good amount of people onboard, but is still available. It always takes a month or so to truly know the results of a show. My suspicion is this will turn out to be a very good show and a promising indicator of positive growth in yachting.'

Mark Cavendish at Heesen gives a builder's perspective: 'This year's show was extremely exciting for us at Heesen. Having our revolutionary 65m fast displacement hull form Galactica Star in the premiere position at Quai des Etats Unis allowed us to show her in the best possible way, with the side door of the beach club open.

'We noticed a higher interest and more in-general curiosity for technological innovations and efficiency. At Heesen we are at the forefront of technological innovations with the FDHF devised by Van Oossanen naval architects. Finally, we were delighted to announce the sale of our first aluminium 40m 'sportster' motor yacht Project Galatea, currently in build with delivery set for early 2014.'

Jonathan Beckett, CEO of Burgess, is as succinct as usual: 'There was less footfall this year – but good quality footfall and we experienced many more serious inquires this year than we have for several years. Also, it was surprising to receive so many offers on yachts at the show. There is certainly much more positivity around and with this comes optimism. I am optimistic that there is a much clearer understanding of where the market really is – both from a buyer’s perspective and also from a seller’s perspective. Finally buyers and sellers are playing on the same playing field.'

But he adds a note of caution: 'Again, the disappointing thing for us was the lack of new clients being brought into the show by the organisers – and this is something they will need to address if the show is going to have legs going into the future.'

Billy Smith at Trinity Yachts says, 'We met with three potential new construction clients during the show, although all three were in discussions with us prior to the show. There was only one potential client for new construction who was a walk-in, without a broker, which is pretty uncommon these days.

'I have not heard much from the brokers about yachts actually selling or offers being accepted during the show. I would be interested in seeing these numbers as someone needs to do an honest analysis of the cost/benefits of these yacht shows.'