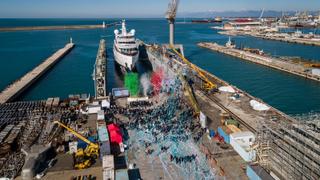 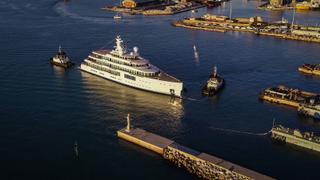 Italian yard Benetti has launched the second of its three 100m+ superyachts at its Livorno shipyard. FB272 took to the water for the first time on February 5 at a ceremony attended by brokers and friends of the shipyard.

The 107.6 metre yacht features six decks and is built from a steel hull and aluminium superstructure to comply with the PYC code. Project-managed by Burgess, the yacht has a displacement exceeding 5,500 GT, a 17 metre beam and a hybrid propulsion system with diesel-electric engines.

The design sports 800 square metres of glass on the exterior of the yacht, with three metre windows that flood the interior with light. Dining and social spaces are plentiful on the main deck and are sheltered by the superstructure. A private deck sits above, leading towards the helicopter pad, which is equipped with a fuelling station.

Speaking at the launch, Azimut Benetti president Paolo Vitelli revealed the build had taken more than two million work hours from over 100 suppliers. “I could not be prouder to stand here among Benetti’s family, friends and colleagues to witness the launch of our latest enthralling creation,” he said.

“This iconic project has had a huge impact on local industry and, after more than two million hours of skilled work from over 100 suppliers, we can truly pronounce her as a wonderful achievement for Livorno and the “Made In Italy” ethos as a whole.”