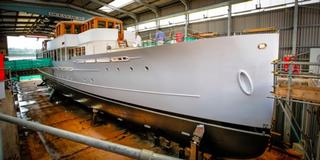 The 50 metre classic superyacht Alicia has been pictured on sea trials in the Solent just days after emerging from her mammoth three year renovation. Alicia was relaunched on August 14 from the Southampton Marine yard after beginning the refit in 2015.

The yacht underwent “major structural works” at the yard, including the complete rebuild of her systems. She was also treated to a completely new aluminium superstructure and hull. Design Unlimited undertook the interior design and exterior styling while Canark Marine undertook the naval architecture.

The yard said that Alicia, which was launched in the 1930s as one of the eight yachts to be built by US yard Defoe, had been restored to the splendour of her era. SMS Group chief executive Peter Morton described the yacht as “unquestionably beautiful” and said the launch was “a major positive milestone in another huge refit project.”

Alicia is the third iconic superyacht refit for the yard following Sir Charles Dunstone’s Shemara and Lord Sugar’s Lady A.

“The project has seen the best of British design, innovation and engineering and we now look forward to a successful period of trials pre-handover,” he added.

Meanwhile the owner of Alicia complimented the yard on a job well done. “Refitting Alicia in the UK was the right call and it has been an absolute delight; the end result will be something that we can all be very proud of – she’s fantastic, she’s British – and she’s truly unique. For many years to come she’ll be a big part of our family,” he said.

After undergoing sea trials in the Solent, Alicia is expected to head for the Mediterranean and join 300 of the world’s most beautiful modern and classic yachts for the 20th Les Voiles de Saint Tropez in September.