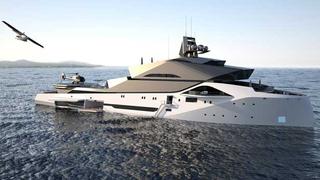 New design studio Arman has launched itself on the superyacht design scene with a 90 metre futuristic explorer yacht, which designer Arman Fissette believes is on the crest of new trends in superyachting.

With an increasing number of superyacht owners eschewing the traditional 'wedding cake' style of superyacht in favour of unconventional and unusual designs, and looking to venture beyond conventional cruising grounds, Fissette may be on to something with his stealth frigate-inspired explorer yacht. Its name - DUNE 90 - alludes to the undulating, wind-sculpted quality of sand dunes that were another source of inspiration for the Antwerp-based Belgian designer, whose design credentials include sailing catamarans at Blubay Yachts, aircraft interior design and transportation design projects at BMW DesignworksUSA.

The DUNE 90 measures 90 metres overall and is envisaged as a true explorer yacht, built for both high and low latitude cruising and equipped with a helicopter hangar, submarine dock, amphibious craft, three large tenders, six waverunners and a garage containing four off-road vehicles. The yacht will provide accommodation for up to 22 guests in an owner's suite and 10 guest cabins, and to serve their needs and run the yacht the crew component will number 28.

Features of the formidable-looking vessel include a large glass atrium on the upper deck with arabesque-type light filters to retain privacy and coolth while allowing natural light in, and a glass visor-like overhang on the foredeck which extends from the owner's saloon over the swimming pool forward, giving the yacht its characteristic appearance.

The displacement yacht will be powered by twin Caterpillar 3516B diesels, and is projected to reach a top speed of 17 knots. Its range is expected to be 11,000 nautical miles at a 14 knot cruising speed.

Fissette points out that the DUNE 90 has moved beyond the basic concept stage as full preliminary drawings and specifications have been done in close adherence to classification rules. 'There's interest from several potential clients at this point,' he says.

Also on the design studio's drawing boards is a 75 metre yacht in the same vein, which has attracted interest from both a client and a builder. Arman has embarked upon a yard selection process for both projects.