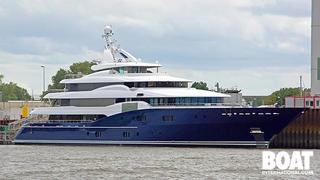 News filtered through yesterday that a new yacht had been launched at Abeking & Rasmussen, and we now have the picture to prove it. The 78.43 metre motor yacht that hit the waters of the River Weser is believed to be hull number 6492 and the fourth in a series of similarly sized superyachts from the German yard, her predecessors being Eminence (2008), C2 (2009) and Titan (2010).

Every yacht in this series designed by Reymond Langton Design has distinctive nuances in its exterior styling, and this new launch is no exception, sporting a blue hull and re-designed mast and sundeck with hardtop that distinguishes her from her sisters.

Her name remains carefully concealed by the yard for the moment, but we will be keeping an eye out for it when the yacht is delivered in the near future.