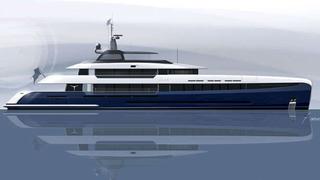 Acico Yachts of The Netherlands has presented its new semi-custom superyacht series.

The Enkhuizen-based yard has teamed up with Dutch compatriot Sea Level Yacht Design on the series, built in aluminium and steel-aluminium. All the boats are designed as long range displacement craft, bar the 14m, which is a fast planning motor boat.

Largest is the 50m Acico motor yacht, which sleeps up to 12 guests in six large staterooms, four of which are situated on the lower deck, one on the wheelhouse deck, and the master suite with private balcony on the main deck. There is ample seating and sunbathing space on the flybridge, as well as a fully equipped beach club.

The 40m is notable for its outdoor spaces spanning two decks. The boat also features a full-beam Jacuzzi. Moving down the range, the 33m version accommodates 10 guests in a master stateroom and four guest cabins, and berths are provided for five crew. The designers have also found room for a tender garage, jet ski crane and a large sunbathing area.

The 29m Semi-Custom has a two deck raised pilot house configuration, with the owner’s stateroom located on the main deck with direct access to the bow, while a full beam VIP stateroom and two mirror-image double suites are located amidships.