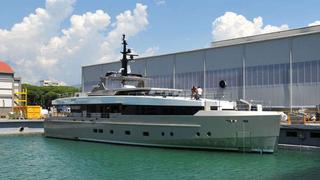 The first Impero 37 RPH superyacht was ordered in 2012. NONO is the fourth superyacht launched from the Italian yacht builder since the start of 2014 with two more yet to come this summer. She follows the launches of the first 35 metre steel displacement Admiral Classique 35 superyacht Foam, the Tecnomar Nadara 40 superyacht Low Profile, and the dragon-emblazoned, Nakhimov-designed Admiral Regale 45 superyacht Flying Dragon.

The Impero series by Admiral features exterior styling by Luca Dini while interiors are in-house by Admiral Centro Stile. The semi-displacement, raised pilothouse superyacht is constructed entirely in aluminium. The modern, sleek exterior styling is emphasised by the yacht's metallic, light-bronze hull paint and peal-white superstructure. The yacht is also available in a tri-deck version.

NONO's exterior design features large glass surfaces, which wraps around the front of the main deck, bringing a great deal of light inside. The main saloon has full-height sliding doors that open this space dramatically to the outdoors. Forward on the main deck is a full beam master, which also features large windows. The suite has two walk-in wardrobes and his and hers en suite bathrooms. Below decks, guests are accommodated in four guest staterooms.

Admiral superyacht NONO will be on display at this year's Monaco Yacht Show and the Fort Lauderdale International Boat Show.