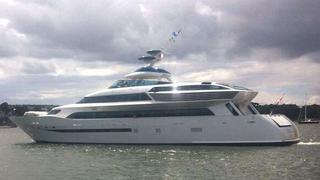 The long-awaited 50 metre Project 305, superyacht Alamshar, has been delivered at the Devonport yard in Plymouth, UK.

She is perhaps record-breaking as the longest superyacht in build ever recorded – spanning some 13 years. Alamshar was started in December 1998 and originally launched in 2003, but a series of delays – from a fire in 2006 to numerous engine reconfigurations – have extended her delivery date until this time. Commissioned by the Aga Khan, the build has been cloaked in mystery since its inception. She is said to be named after one of the Aga Khan's race horses.

Alamshar features naval architecture by Donald L Blount and Associates with design from Pininfarina and interiors by Redman Whiteley Dixon in the UK. Construction is expected to be in aluminium and composite, and her layout should prove interesting as well. She is designed for extremely high speeds, reportedly briefed to hit top speeds between 60 and 70 knots, powered by six gas turbine engines. Failures in said turbines were largely responsible for Alamshar's delayed build progress. All speed expectations are points of conjecture until confirmation from the yard is received.

Up until this week, she was last spotted on sea trials in May, 2013, a full 10 years after her initial launch. Now she has been seen leaving Plymouth, and she is currently sailing off Brittany, France, en route to Porto, Portugal.