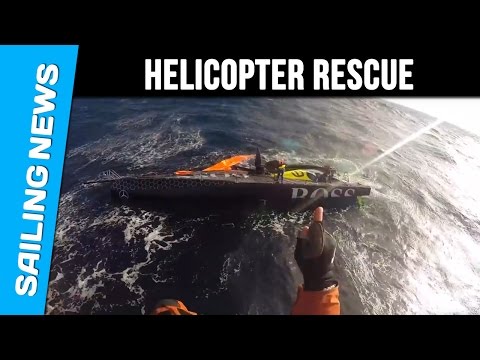 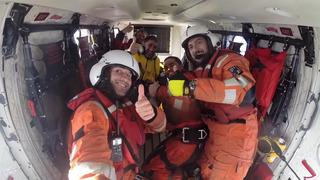 British round-the-world sailor Alex Thomson and his co-skipper, Spanish sailor Guillermo Altadill, were airlifted off their 60ft racing yacht Hugo Boss after it capsized in heavy seas while taking part in the Transat Jacques Vabre race.

The incident happened on Saturday afternoon about 100 miles off the north coast of Spain when Hugo Boss, an IMOCA 60 yacht, was reportedly hit by a rogue wave, which dismasted her, leading to her capsizing and flooding.

Thomson and Altadill were rescued by helicopter crew from the Spanish coastguard, the Salvamento Maritimo, after they had activated their emergency EPIRB.

A spokesman for Thomson’s and Altadill’s team said: “The yacht had taken on a substantial amount of water and the rig had sustained damage requiring the skippers to leave the yacht.”

A recent post on Thompson’s Facebook page said the team, including Thomson, was now back with Hugo Boss to try to salvage her. It is reported that they have removed the rig and pumped out the water, enabling her to be towed to La Coruña.

Hugo Boss was one of seven IMOCA yachts, said to cost around €10 million each, forced to retire from this year’s Transat Jacques Vabre due to the challenging conditions.

Ross Daniel, technical director of Alex Thomson Racing, said he was proud of the way the team handled themselves in a severe situation.

But it should be no surprise that the experienced Thomson, who has a reputation of a daredevil, as his much viewed ‘mast walk’ video showed, reacted well. He is an experienced sailor and the youngest skipper to win a round-the-world race. Thomson, who intended to use the yacht for his attempt at the solo Vendée Globe race next year, is now questioning how the capsize could have happened in conditions, while severe, not uncommon in the Southern Ocean, the environment for which the yacht was designed.

Thomson said: “We need to understand why it happened. It was a rogue wave, but we should not have inverted the way we did.”