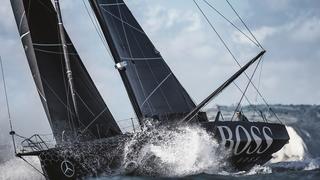 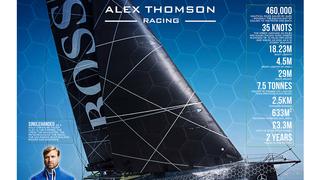 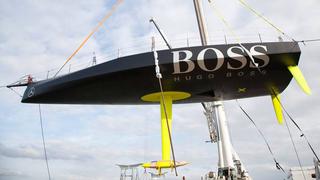 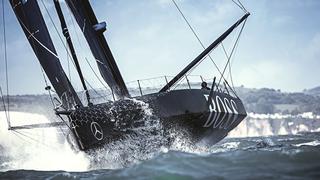 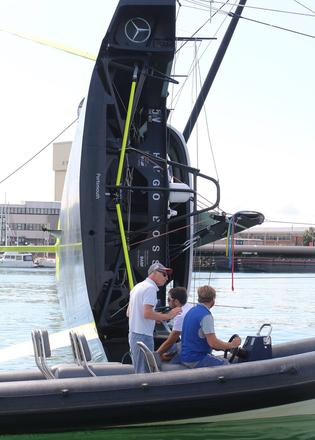 Alex Thomson and his team have launched their new Hugo Boss racing yacht in the lead up to the Vendée Globe race next year. We bring you the first sailing photos of the super stylish yacht, which is emblazoned with the Hugo Boss logo and has a Mercedes emblem on the bow. The yacht was built at Green Marine in Southampton, UK.

The Vendée Globe is a tough competition, often referred to as the “Everest of sailing”, with solo sailors sailing around the world without any assistance. Arduous tasks aren’t new to Alex Thomson, who has tested his daring and endurance in some great sailing stunts.

Alex Thomson will attempt to be the first British sailor to win the race by sailing approximately 25,000 nautical miles – roughly the distance to the moon and back – while travelling at a top speed of 35 knots, enduring wind speeds in excess of 70 miles per hour and waves as high as 10 storey buildings.

His new Hugo Boss yacht is 18.23 metres LOA, has a draft of 4.5 metres and a mast height of 29 metres. The new yacht has been designed to be five per cent lighter than his previous yacht, coming in at 7.5 tonnes. It’s hoped shaving off the added weight will give Thomson an edge over the competition.

Thorough hydrodynamic research and computational fluid dynamics have gone into creating the new yacht, and many of the new design features and technologies utilised in the design of the new Hugo Boss yacht are said to be derived from Formula 1 racing. It’s a trend we are seeing more and more in yacht design, for example, with how America’s Cup team Land Rover BAR are teaming up with F1 designers.

As for the new Hugo Boss yacht’s stylish exterior, the world renowned industrial designer Konstantin Grcic worked closely with the Alex Thomson Racing Team to create the yacht’s sleek and sexy black design aesthetic. Grcic also tried to bring some comfort into the yacht’s sleeping area and navigation station while keeping a priority on lightweight design and speed.

Hugo Boss yacht launching and on the water

While the Vendée Globe doesn’t begin until November 6, 2016, Alex Thomson and his new Hugo Boss yacht will be put to the test during the 5,000 nautical mile Transat Jacques Vabre race from France to Brazil, which starts on October 25, 2015, followed shortly by the transatlantic B2B race starting in St Barths on December 6.

British sailor dies in Clipper Round the World Yacht Race