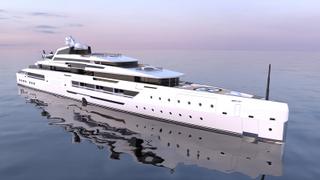 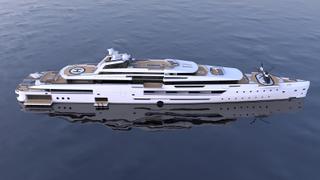 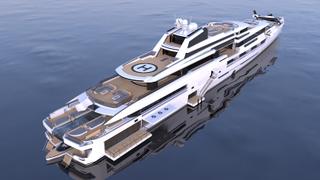 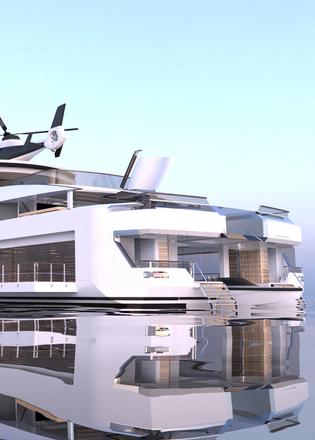 Based on a full displacement hull, this design features a lower than average volume-to-length ratio, as Aparicio de Leon was keen to focus on sleek lines over interior space. "Most of the yachts of a similar size that I've seen looked too big, more like transatlantic cruisers. I wanted to find out if I could make a sleeker one,” explained the 2012 Young Designer of the Year finalist.

As a result, Ines' beam is 15 metres, which is three to five metres less than you might expect from a yacht in this size bracket. Having said that, the designer has opted for a vertical bow, which increases the available interior space, when compared with a more traditional bow shape.

Other notable styling choices include a multitude of circular portholes — one of which is situated on the waterline to provide spectacular underwater views from the semi-submerged viewing lounge.

Accommodation is for up to 20 guests and 42 crewmembers. The master suite sprawls across the entire upper deck, complete with private office, walk-in closets and a separate dressing room. There is room on this level for two VIP suites, or the owner can opt to replace them with a private lounge, cinema and library. Two further VIP suites are situated on the bride deck, while the main deck provides the majority of the guest accommodation, with room for eight further cabins.

Take a closer look at the 114 metre superyacht concept Ines

Communal areas include a spacious superyacht beach club, which is illuminated by natural light filtering through from the glass-bottomed swimming pool above.

Tender and toy storage space is plentiful with room for two limousines measuring up to 10.8 metres as well as a U-Boat Worx 3 submersible, two crew RIBs and four Jet Skis. Helicopter operations have also been kept in mind, with a touch-and-go helipad on the bow and a fully certified superyacht helideck on the upper deck aft.

Summarising the design's blend of classic and modern elements, Aparicio de Leon concludes, "The portholes are really old-style. I think it's something yachting should never lose with all the brand new designs that we see today. I want to keep making something modern but timeless."