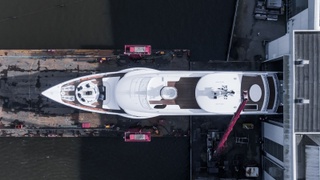 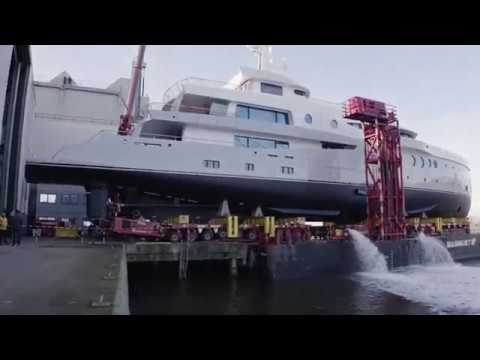 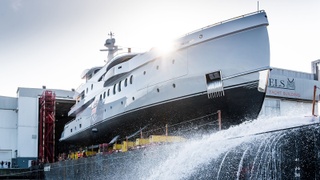 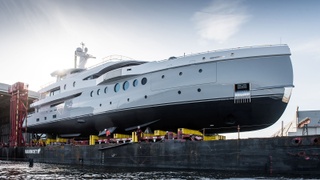 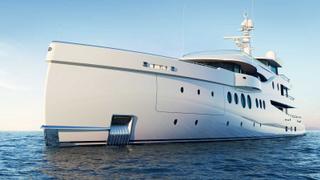 Amels has released a behind the scenes video showing the launch of the yard's first 62.5 metre Limited Editions 206 superyacht.

The yacht, which marks the first launch for Amels this year, will now commence sea trials and commissioning of all systems ahead of delivery, which is scheduled for later this spring.

Based on the proven platform of the Limited Editions 199, the 206 features exterior design by British designer Tim Heywood with the Amels design team.

"It's a wonderful build milestone to see her outside," build captain Fraser Gow said. "Everyone's done an exceptional job, particularly on the finish which you can really appreciate now she's outside."

The yacht features a light grey hull and white superstructure while interiors come from Laura Sessa working in collaboration with the Amels in-house interior designers.

Key exterior details include the superyacht beach club, which spans a total area of 35 square metres. However, the star of the show is arguably the massive superyacht sundeck, which has been stretched to 23 metres long and contains sunpads aft and a hexagonal spa pool forward.

Accommodation inside the 1,161GT interior is for up to 12 guests in six cabins, including two VIP suites on the bridge deck and a main-deck owner’s cabin complete with port and starboard folding balconies. Elsewhere, the 206 has enough storage for two tenders measuring up to eight metres and three jetskis.

Iconic features from the Amels Limited Editions 199 yacht have been retained, such as the large circular portholes and the gull wing doors that provide access to the foredeck tender garage. The yacht will have a maximum speed of 16.5 knots and a range of 5,000 nautical at a cruising speed of 13 knots.

“The boat is full of details, little surprises, little differences,” exterior designer Tim Heywood previously said. “Aft of the wing station, the form of the boat shoots up to the deck above and then I changed the tumblehome from in to out – from positive to negative – and it makes such an interesting form.”

The Amels 206 is the first of three new build Amels superyachts due for delivery this year. The yacht also has a number of refit projects on the go, as well as two Damen Sea Xplorers and a Damen yacht support vessel in-build.