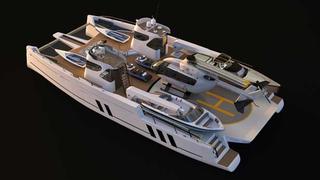 Arista Marine’s Phantom 24 design takes advantage of the characteristics of a catamaran to create a stable, spacious support vessel.

The 24m motor cat is intended as both a storage facility and lounging space – and both these capacities are improved by its duel hull design.

‘Because of the 12m beam afforded by the catamaran platform, the 24m Phantom has the same deck space, and hence carrying capacity, as a considerably larger monohull,’ says David Hicks, director of sales marketing and design at Arista Marine.

‘Staying just under 24m means the Phantom can be crewed by two which greatly reduces the annual operational cost, insurance and class compliance, great fuel consumption being another benefit.’

The catamaran design is also more stable than a monohull, making it particularly suitable for relaxing or entertaining.

‘When the tenders are off it gives the owner well over 200m² of deck space,’ says Hicks.

‘Primarily we see the main use of this space being as a beach club. The Phantom's deck is closer to the sea so it’s easy to enjoy swimming and water sports without being intimidated by being alongside a high-sided yacht. The deck space is also a great asset when entertaining, be it for a large drinks party or BBQ.’

There is a small pool on the foredeck, with surrounding space for several sunloungers, plus a small bar and galley for food. Below deck the design team has produced several layout options that assign one hull to owner use (with a shower, daybed and lounge) and the other to crew (with accommodation, a galley and workshop).

Although it only requires two crewmembers for operation, the boat can sleep up to 12 additional staff – or provide accommodation for extra guests – depending upon owners’ requests.

The Phantom 'H' variant offers an occasional helicopter landing pad, meaning one is not required on the main vessel. For new builds this simplifies construction and class issues.

The Phantom 24 will feature two Prime Movers at 800hp (light duty rating) and will have a cruising speed of 14 knots and a maximum speed of 16 knots, subject to hull form development.