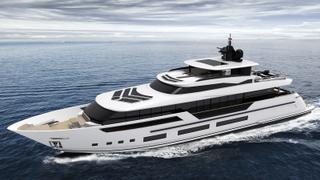 The yacht is now due for delivery in a month to a Chinese client, who also bought an Asteria 96 and Heysea 82 yacht in 2018.

The launch comes after the yard kicked off the year by launching the 35.05 metre Asteria 116 in January.

Designed in-house by Heysea, the Asteria 126 is constructed from a FRP hull and superstructure with a beam of 7.68 metres, a maximum draught of 1.54 metres.

Accommodation is for up to eight guests split between four cabins, including a main deck owner’s suite. On the lower deck, a full-beam VIP sits just aft of the portside twin and starboard double cabin. The crew quarters are situated in the bow and allow for a staff of up to five people, with a crew mess and double cabin for the captain.

Key features include a Cabana-style beach club complete with dayhead, and a large aft deck, which is split between sunbathing space aft and sheltered dining space further forward.

Moving inside and the open-plan saloon comprises an eight-person dining table, L-shaped settee and a bar area with three stools. However, the star of the show is the spacious superyacht sundeck — this area will be fitted with a tender davit, spa pool, dining table, barbecue, bar area and a C-shaped settee, with enough room leftover for three sunloungers to be placed back aft.

Power comes from a pair of 1,925hp Caterpillar C32 ACERT engines for a top speed of 22 knots and comfortable cruising at 20 knots. When trimmed back to an economic speed of ten knots, the Heysea Asteria 126 will have a cruising range of 1,200 nautical miles.