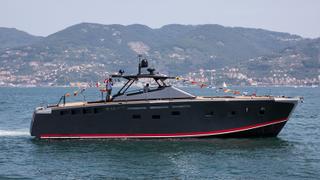 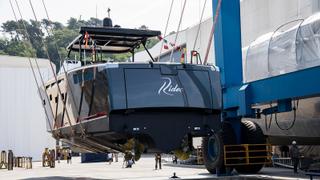 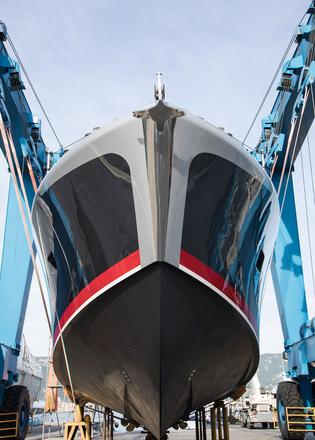 The Baglietto MV range of high-performance day boats has expanded after the Italian yard launched the first hull in its new MV19 series, Ridoc. The ceremony took place on June 10 in the presence of her European owner.

The 19.5 metre all-aluminium cruiser was designed in a collaboration between Baglietto and Francesco Paskowski Design, with inspiration coming from the First and Second World War MAS military vessels.

Take a closer look at the Baglietto dayboat Ridoc

This sporty open day boat’s purposeful design includes symmetrical air intakes along the freeboard and a flush-fitting teak deck that runs parallel to the sheerline.

On deck relaxation areas include forward and aft sunpads, as well as a comfortable dinette with a wet bar located aft of the exterior helm station.

The interiors of the Baglietto MV19 were styled in cooperation with Margherita Casprini with a focus on creating a retro allure via Canaletto nut upholstery. Key features below decks include a spacious open dinette, comfortable sofas and a fully kitted-out galley.

Ridoc's layout features an owner's cabin in the bow, two guest cabins and an amidships en suite, as well as a captain's cabin with separate exterior access.

In keeping with Baglietto’s reputation for high-performance, her power comes from a pair of 1,800hp MAN V12 engines for a top speed of 40 knots, meaning that she can hold her own among the world’s fastest superyacht tenders. Following her debut season cruising the Mediterranean, Ridoc will get a public debut at the 2017 Cannes Yachting Festival.

Other projects currently under development at the La Spezia-based yard include the new range of 44-50 metre Baglietto superyachts, which was announced at the 2016 Monaco Yacht Show.