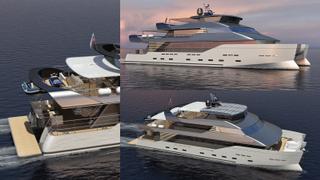 Russian firm Baikal Yachts has signalled its intention to move into the superyacht world with a new 35 metre hybrid catamaran concept that was designed in-house by Maxim Lodkin.

Developed in response to a request from a day cruise firm, this platform is also envisaged in charter yacht and private yacht guises. If built, the Baikal 35 would be a huge step up from the yard’s current 20 metre flagship project, which is currently under construction.

Sergey Gmyra, owner of Baikal Yachts Group, explained: “Considering a new trend towards catamarans, our company has decided to propose to the yachting world a concept enabling a shipyard to make quick adjustments depending on the market needs without introduction of significant changes in basic hulls.”

The private yacht version is the most luxurious of the three with a full-beam master suite situated on the upper deck totalling 70 square metres and boasting a private office and saloon as well as 180-degree views out to sea. Six further double cabins — two on the main deck and four on the lower deck — take the total accommodation capacity to 14.

Tender and Jet Ski storage would be offered on the upper deck aft, while the crew quarters are suitable for a staff of up to ten people split across six cabins. Other key features include a foredeck spa pool and a superyacht sundeck just aft of the wheelhouse.

Power would come from a twin 2,000hp diesel-electric drivetrain that could be topped up by solar panels mounted on the superstructure, thus enhancing the Baikal 35’s environmental credentials.