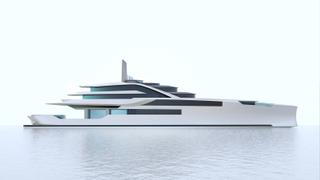 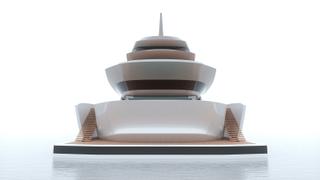 Bannenberg & Rowell teams up with Kusch Yachts on 118m concept

Design studio Bannenberg & Rowell has joined forces with Kusch Yachts on an 118 metre motor yacht called Project Blazon. The concept would be made from a steel and aluminium hull and superstructure and feature naval architecture by Kusch Yachts.

The exterior and interior design will be handled by Bannenberg & Rowell Design. The duo previously collaborated on the 113 metre motor yacht Le Grand Bleu, one of the largest private yachts in the world.

Key specs include an 18.6 metre beam and 5.5 metre draught while standout features include an open plan stairwell linking the decks with the crew stairs and pantries.

A raised pool will sit aft with a spa underneath while the side decks on the port and starboard sides will fold out to become stairs leading into the water. These will also provide access to the water toy garage underneath.

The yacht will also feature a sunken observation saloon and winter garden lounge. The wheelhouse will be located away from guest and living spaces but close to the crew quarters.

Project Blazon will be able to accommodate a total of 76 people; 32 guests in 16 cabins and 44 crew. The guest cabins will comprise a 310 square metre owner’s suite, four VIP rooms and 11 guest rooms.

The yacht will have a top speed of 18 knots and a cruising speed of 16 knots. More details of the concept will be unveiled at the Monaco Yacht Show this week.