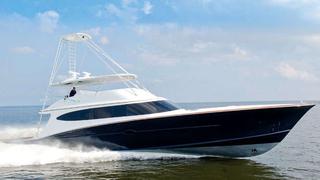 Construction of the the largest custom Bayliss wooden sportfish yacht Orion began in Wanchese, North Carolina, in April 2011 and sea trials took place in early September. Orion features a deep blue paint job on her hull matched by a white superstructure and open tower and is detailed in gleaming brightwork.

Shipyard owner John Bayliss, a former fishing tournament captain, started his purpose-built shipyard on Roaneke Island in 2002 to build custom sportfishers – Orion is the yard’s 16th yacht to be launched. Early on, he collaborated with Florida-based naval architect Robert Ullberg, whose firm did the naval architecture for Orion.

Bayliss is busy with its next flagship, the 27.43m motor yacht Singularis, which is already in build and due to be launched in 2015.