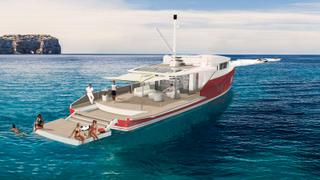 Designed with a 6.5 metre beam, this planing yacht concept would be capable of a cruising speed of 20 knots, topping out at 27 knots, with power coming from a twin 1,140hp hybrid engine set-up.

Key features include folding bulwarks and a large aft deck with more than 50 square metres of space, ideal for those who want to spread out and soak up the sun.

Private Beach boasts a strong connection to the sea with an Opacmare swim platform, which can be hydraulically lowered into the water.

What’s more, the tender storage area is large enough to carry two double-seater Jet Skis as well as a Boesch 560 SunDeck tender. Moving upstairs and the superyacht sundeck would be fitted with a freshwater Jacuzzi for those who prefer to take a salt-free dip.

Accommodation is for just four guests with two full-beam double cabins on board, while a single crew cabin allows the captain to sleep on board as well.

Despite its futuristic use of technology, the Private Beach concept is rooted in the past, as the studio adds: “Its long, open stern and low freeboard is based on the hull shape of trawlers used for prawn fishing.”

Other superyacht projects currently under development at Beiderdeck Designs include the 36.6 metre Dahm 120 sailing yacht, which was developed in collaboration with brokerage firm Dahm International.