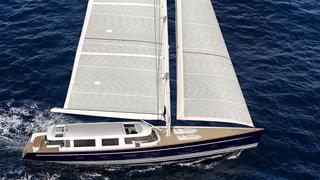 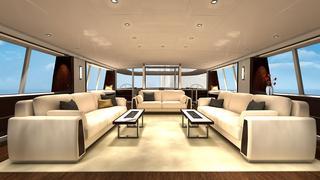 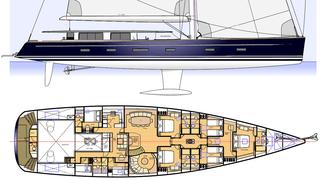 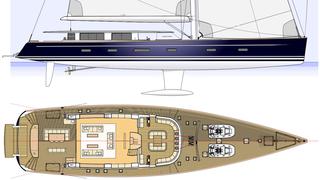 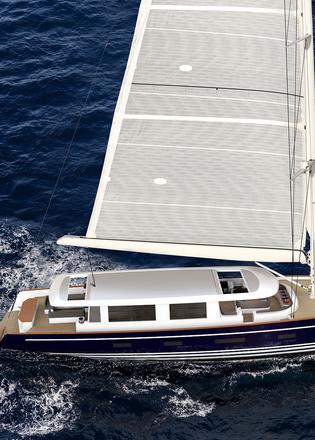 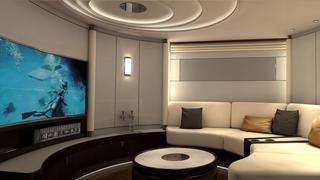 The Dahm 120 is the first new build project from the Dahm International brokerage house. Ned Ship has signed on to build the yacht, which will feature carbon fibre sandwich construction.

Beiderbeck is responsible for the design, styling, naval architecture and interior design of the semi custom superyacht. However, the interior design can be customised to the taste of the owner.

The Dahm 120 design has an impressive beam of nine metres, allowing the designers plenty of space to play with on the layout. The raised saloon is at deck level and has a large lounge area, which is well lit by large windows.

Forward of the saloon, and divided by a sliding door, is the cockpit, which can be fully enclosed by removable window panels for sailing in bad weather. The cockpit also contains the wheelhouse and all of the automated push button sailing controls (with the exception of the code zero winches).

The advanced control system combines with the carbon fibre furling boom and the self-tacking furling genoa to mean the yacht can essentially be sailed single-handed.

The 45 metre carbon fibre mast can carry 680 square metres of sail area, and is offset by the keel’s 4.2 metre draught.

Two 3.4 metre tenders are stored in recesses on the foredeck. Having two means crew supply runs are able to happen at the same time as guest operations.

The Dahm 120 has a nine metre beam, giving the designers plenty of space to play with on the layout

The innovative folding stern platform from Opacmare opens up into a beach club with day head.

On the aft deck there is a dedicated exterior dining area, complete with minibar and BBQ, and protected from the elements by the superstructure.

Below deck in the centre of the yacht there is a well-lit dining room and opposite is a room that is normally only found on 50 metre plus superyachts — a cinema with a 65 inch curved screen.

Dahm International was taken over by new owners in 2014 and the rapidly growing brokerage house will be responsible for managing the project and supervising construction.