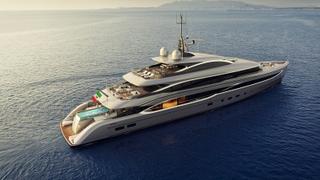 The four models are fully customisable, with the yard working with individual owners on their desired layout.

The Italian yard used the occasion of the Monaco Yacht Show to reveal that it had sold the first 50 metre BNow yacht to a repeat Benetti client from the Middle East.

General manager of the yard, Christos Ramnialis, revealed more details about the range in Monaco highlighting a short delivery time and “traditional Benetti styling”. RWD’s Jack Canning added, “We have huge windows in all models which gives a great interior feel and exterior look.”

Other standout features in the range include a rotating bar and fireplace in the owners’ cabin. The 68 metre model is equipped with a firepit on the foredeck which converts into a coffee table. Meanwhile the 63 metre model has a seven metre infinity swimming pool at the fore.