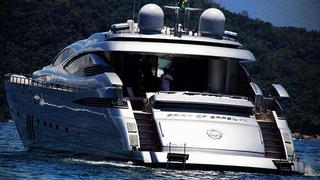 Brazilian billionaire and superyacht owner Eike Batista has had his yacht Spirit of Brazil VIII seized by police.

Five days after Eike Batista had his house in Rio de Janeiro, Brazil, raided by the Brazilian police force, the police have now taken Eike Batista's yacht, three personal watercraft and a speedboat.

Spirit of Brazil VIII is a 35.37 metre Pershing 115, the flagship of the Pershing fleet. The high-performance yacht – by Italian production builder Pershing, part of the Ferretti Group – can hit a top speed of 36 knots powered by a gas turbine and 3,510hp engines. The Pershing 115 is designed by Fulvio De Simoni, Advanced Yacht Technology and Ferretti's in-house engineers.

Eike Batista is currently on trial, being charged with alleged insider trading and market manipulation. The confiscation of Eike Batista's assets come just after Brazil's federal judge Flavio Roberto de Souza ordered all of Batista's financial assets in Brazil to be seized, which includes his airplanes and the property owned by himself and his sons Thor and Olin and his former wife Luma de Oliveira, and Flavia Sampaio, mother of his third son – in total all assets are worth up to 1.5 billion reais (or £342,830,400).

He made his first million before he was 24, trading on gold, and Eike Batista has been a bold figure in the world's richest list stratosphere – ranking as 10th richest in the world by 2012, according to Bloomberg's Billionaire Index, with a net worth of $31.9 billion at the time and stating he would one day claim the top spot as the richest. Eike Batista has certainly enjoyed a playboy lifestyle: marrying a Playboy model, racing speedboats and enjoying life on his superyacht. But his prosperous path has hit rocky times, with his oil conglomerate OGX Petroleo & Gas Participacoes SA quickly losing value over the past years.