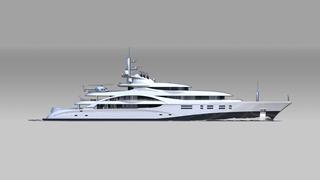 Blohm & Voss has unveiled a new 88.5m motor yacht concept drawn by Michael Leach Design, in a partnership reminiscent of that which created the spectacular 95m Palladium (BI303, September 2011).

The new concept, dubbed the 88m Motor Yacht Concept, or BV 88MCA MLD, was created to offer clients a large yacht that was specifically designed to come in under 3,000GT, following MCA regulations rather than SOLAS.

Although at first glance her lines appear to borrow inspiration from Palladium, the design was created from a blank sheet of paper by the Michael Leach Design studio, and features ‘various technical aspects that have been considered and optimised’.

The provisional specs are for a 15.4m beam on a length overall of 88.5m, with a proposed top speed of 17 knots and a 16-knot cruise speed delivered from twin 2,160 kW diesels driving conventional propellers. Accommodation has been set for 12 for owner and guests, with 30 crew.

Look out for more on this design soon.