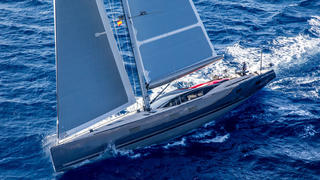 Speaking to the BBC, a spokesperson for the company explained that Green Marine had been hoping to secure an order to build the hull and superstructure of a superyacht, which did not materialise.

Parent company Vitters, who bought Green Marine in 2010 and moved the yard to a new high-tech facility at Hythe Marina, confirmed the news and promised to complete all uncompleted projects.

In a statement, the Dutch yard added: “The decision had to be taken due to the current uncertainty of future business and the changed business environment. For specialised companies, such as Green Marine, which depend on a low number of high value projects, it is very difficult to keep a constant level of people employed with fixed overheads. At the moment the future possibilities for a new business approach are being investigated.”

Founded in 1982, Green Marine contributed to more than 180 boating projects, including the hulls of Vitters sailing superyachts such Ribelle and Missy (pictured above), as well as the Wallycento cruiser / racers Open Season and Galateia.