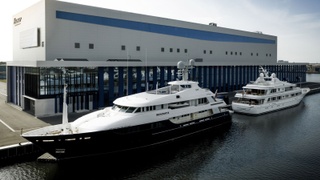 The 50 metre Feadship Broadwater has returned to her home yard for pre-season deck and engineering works.

The yacht, which was the world’s first all-aluminium yacht over 500 GT when she was launched as Blue Moon in 2000, will undergo work at Feadship Refit & Services.

Currently listed for sale by Worth Avenue Yachts with an asking price of $25,500,000, Broadwater was designed by Donald Starkey, with Feadship De Voogt Naval Architects handling the naval architecture.

The yard said that the work would “ensure that any outstanding issues related to class certification are resolved in order to speed up the sales process.”

Meanwhile Broadwater’s 52 metre sistership of the same name, originally launched as Rasselas, has also arrived at the yard. Feadship will carry out an inspection on the yacht in preparation for a potential refit.

Launched in 1994, Broadwater was designed by Frits De Voogt, with an interior design created by John Munford.

Manager of refit and services at the yard, Juul Back, said: “It is a fine sight to see these two famous superyachts docked next to each other. The crews of both yachts are very hospitable, adding to the bustling atmosphere in and around the yard.”