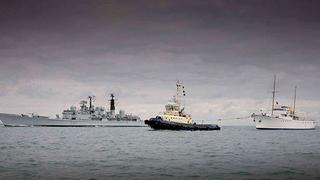 Burgess Marine Limited has been taken over in a multi-million pound management buyout, with £11 million of private equity committed to the acquisition and future investment. Managing Director Nicholas Warren spoke with Boat International to shed light on what the investment will mean for Burgess Marine's superyacht interests going forward.

UK private equity investor RJD partners has committed up to £11 million to fund the management buyout of the family-owned Burgess Marine and drive future growth, investing in Burgess via a new vehicle called RJD Burgess Investment LP. The investment marks the exit of David Warren from the company. His son, Nicholas Warren, has run the company since his father retired in 2008 and will helm the Dover-based business going forward along with existing members of the Burgess management team.

" is going allow us to achieve further domestic growth in UK, but also enhance business in Palma with STP and potentially expand in the South of France," says Warren to Boat International. Specifically, Burgess Marine will look to expand the technical team at STP and increase the workshop capacities at the yard. "Rather than just providing the labour, we're looking to establish a technical team for turnkey refits," Warren adds.

As for superyacht work in the UK, Warren notes that the company has the opportunity to utilise a shipbuilding shed in Portsmouth for a big project – a huge facility with potential for the right project. Ocean Independence is shopping around the new built classic-style motor yacht Project Nelson with the aim for it to built at Burgess' facility.

"We as a business have had a positive growth curve for the past five years, we have strong customers in commercial, defence and superyachts, it seems like logical move to grow further," says Warren to Boat International. "The superyacht work we're doing in UK and internationally will carry on; this is a market that has great opportunity, and we're working incredibly hard to deliver what our customers require. It's about continual delivery of quality, and that’s we’re striving to do."