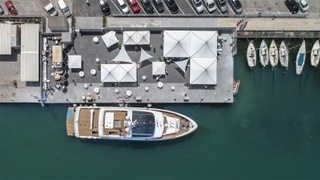 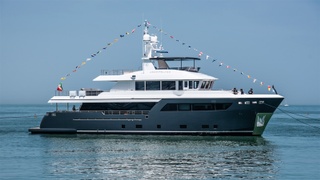 Cantiere delle Marche has launched the fifth hull in its Darwin Class 102, which has now been named Archipelago.

The yacht was launched on Saturday, June 15 at a ceremony attended by the owners, their guests and the yard’s team.

The 31-metre explorer will now undergo sea trials ahead of her scheduled delivery.

The owners intend to use the yacht to “holiday at sea in total peace, safety and relaxation”, the yard revealed, describing Archipelago as “encompassing all the renowned qualities of the Darwin Class”, from construction and equipment to seaworthiness and long range.

Yard co-founder Vasco Buonpensiere congratulated the “unbelievable energy and capacity”. “This build has been another amazing example of the incredible flexibility of this shipyard,” he added.

Naval architecture and engineering comes from Sergio Cutolo/ Hydro Tec while interior design has been handled by Francesco Guida.

Accommodation is for a total of 10 guests in five guest suites. Four sit on the lower deck while the owner’s suite sits on the main deck forward. The crew quarters meanwhile allow for a staff of six. A large open-plan living room sits on the main deck, alongside a formal dining area.

The interior styling by Guida has been described as “refreshing”, with “white, green and blue hues”.

Power comes from a pair of Caterpillar C18 Acert B engines for a top speed of 13 knots, cruising speed of 11.5 knots and range of 4700 nautical miles at 9.5 knots.