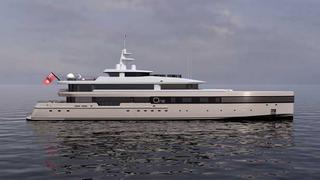 The French shipyard CMN has incorporated its latest yachting and military technology in a 65m showcase concept.

Project One was developed by the builder’s in-house design and engineering teams as a demonstration of CMN’s capabilities, intending a client to pick and choose the layout and elements to include. Because it uses cutting-edge but tested technology, whatever form the boat takes CMN will be able to be build it today and price it very accurately.

Much of the experience for these technologies, such as the hybrid engine (which allows the captain to use economical electric motors for low speeds and diesel engines for high speeds) comes from CMN’s military division.

‘With a military ship the idea is to be very silent when it goes close to the shore on a special mission,’ says Cyril Le Sourd, CMN sales and marketing manager, who was heavily involved with the design process. ‘So we have the idea of hybrid propulsion where your boat is going just six or seven knots, very silent.’

‘Then with a yacht, wouldn’t it be nice to leave Monaco in the morning, when everyone is asleep, and go to Villefranche at six or seven knots, so no one is woken up. When you arrive you don’t drop anchor, you just use dynamic positioning. It’s eco-friendly, you use less fuel and you do not disturb the ground with anchors.’

‘The three domes rotate on a ring, to prevent any shading from the central mast. You don’t need to multiply the number of antennae – you always have good coverage, because they turn automatically following the satellite. This is based on a software we’ve developed,’ says Le Sourd.

The designers also wanted to design a yacht that maximised interior space without piling up too many decks.

‘We slightly increased the beam and extended the waterline length, with the bow being vertical, allowing us to put a bit more accommodation forward,’ says Le Sourd.

‘Many yachts are not full beam above the main deck, but the shape and design of this boat allowed us to go full beam on the bridge deck and sundeck, to enhance the volume of the cabins.’

Project One features four guest suites on the main deck and two VIP suites on the upper deck. The owner’s suite is adjacent and aft, with an office and large terrace with a private spa pool.

With hybrid propulsion the yacht will achieve a maximum speed of 16 knots with two 1,640kW diesel engines and six knots with the electric auxiliary motors.