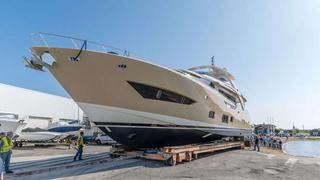 The 26.2m model has been designed to fill in the gap in the Couach range between its current 22m and 28m yachts. The builder's lineup currently includes 13 models ranging from 14m to 50m. In-house designer Franck Reynaud designed the 2600 Fly, starting with a blank-page approach and taking inspiration from previous Couach yachts to inform the 2600's design. She features the brand's distinctive lines with a modern edge. The Couach 50m superyacht La Pellegrina, launched in 2012, influenced the 2600's bow and flybridge layout, the deep-V hull and large sliding side doors on the main deck, which open onto the sea. The 2600 Fly has an updated layout from her predecessors with greater attention paid to passenger circulation and space planning.

Keeping with Couach's performance capabilities, the new 2600 Fly - constructed in composite - can reach a top speed of 31 knots powered by twin 12V 1,800hp MAN engines. The 2600 Fly will debut to the public at the Cannes Boat Show this September. Stay tuned for running shots.