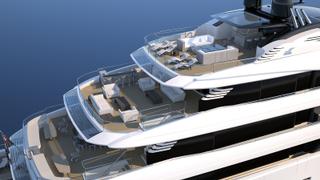 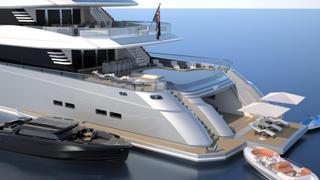 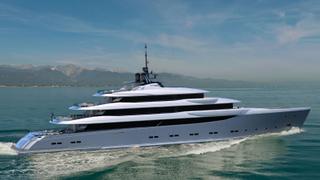 Italian yard CRN has released new renderings of its latest superyacht project, the 70 metre She.

The new renderings show the stern beach club and top three decks of the new concept, which has been developed by CRN in partnership with Italian architecture and design studio Vallicelli Design.

As her name suggests, She “exudes a certain femininity" with "graceful style and a subtly feminine touch".

Architect Andrea Vallicelli said: “The softness and delicacy of feminine forms have strongly inspired this design and its fluid, elegant lines.”

Her exterior showcases a slender profile and linear styling with a horizontal line inscribed from the bow that extends along the hull and around the transom.

Spread across five decks, with ample outdoor space and a dedicated owners deck, She has been designed for an owner who enjoys spending long periods onboard with their guests.

CRN's chief commercial officer, Stefano De Vivo, added: “She is a new design of considerable potential, defined by her flexibility, sophistication of line and generous interior and exterior spaces devised by Vallicelli Design in what is proving a highly satisfactory partnership”.

While little else is currently known about She, the news comes as CRN is building three yachts at its Ancona facility; the 79 metre CRN 135, 62 metre CRN 138 and the 62 metre CRN 137, which is slated for a 2019 delivery. CRN also recently announced the sale of the 70 metre CRN 139.