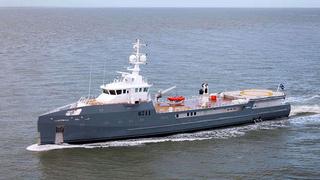 As part of the Damen Shipyards Group – which consists of 40 shipyards around the world – Amels manages the sales and marketing of the Damen-built axe-bow support vessels. The second 67m Sea Axe, 6711 was launched in November 2013. She is due for delivery later this month in January 2014, ahead of schedule.

The build of 6711 was managed in cooperation with Imperial, acting as broker, owner's representative and construction project manager, continuing a long-term collaboration between Imperial and Amels. 'The 6711 has been a very interesting project, a special type of support vessel with a highly customized and very practical layout whereas the building process at Damen the runs like clockwork,' says Evgeniy Kochman CEO of Imperial.

The Sea Axe yacht has a grey hull and white superstructure and has been faired and painted to superyacht standards. She accommodates up to 21 staff and crew members. 6711 boasts 275 square metres of deck space, excluding her fully certified helipad, and she has a 74 square metre garage and workshop. She has been fully specified with a focus on diving and features an extensive 74 square metre dive centre, which include a decompression chamber. Powered by four MTU 16V 4000 engines, she has a range of 4,500 nautical miles at 16 knots.

'We are seeing an increasing number of superyacht owners appreciate the benefits of a well-equipped support vessel customised to their particular requirements,' says Rob Luijendijk from Amels, 'This is why we are developing even larger options up to ninety metres in length. Damen has already delivered three yacht support vessels and has another four under construction.'