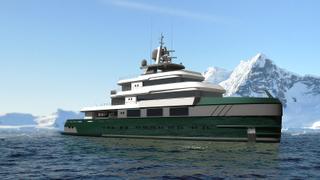 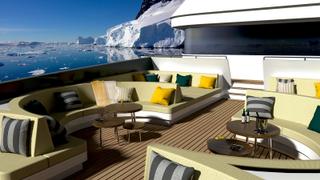 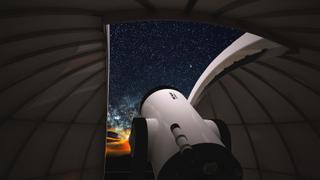 Diana Yacht Design has unveiled what it claims is the first explorer yacht design to include a private observatory.

The 60 metre explorer yacht concept Beyond is the first design by in-house designer Casper Marelis, who was previously a finalist in the Young Designer of the Year Awards.

Marelis said he aimed to capture a “rugged look” in the yacht’s design. "The grey border interrupts the green hull, which makes the bow look even more impressive while ensuring the overall side view does not look too massive,” he said.

The design features ample storage space of tenders, submersibles and water toys while four overhead cranes can be used to move the extra vessels.

“The multi-purpose tender garage on the main deck, which can be configured to the needs of the exploration to let you store snowmobiles, extra dinghies and skies in a closed space ensure her owner is able to discover more than the obvious,” Marelis added.

Beyond’s crowning attraction however is the dedicated observatory on the sundeck, which features a gyro-stabilised telescope. A helideck sits next to the observatory on the bridge deck aft, with plenty of space for a submersible and toys.

Meanwhile key interior layout features include a cinema on the cabin deck, dive store and a gym and wellness centre.

Accommodation is for 14 guests in seven staterooms, including four doubles, two twins and the owner’s cabin, offering 180 degree views and complete with a private Jacuzzi. Crew quarters accommodate a staff of 17, including the captain who will have a private cabin by the wheelhouse.

Power will come from a pair of Caterpillar C32 for a top speed of 15 knots.