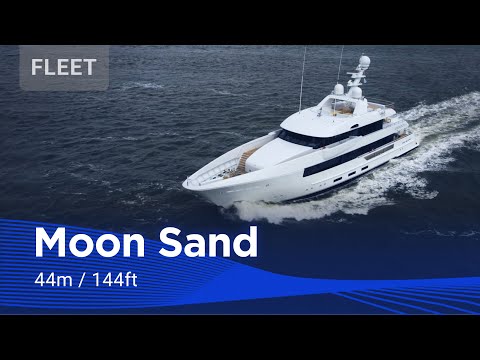 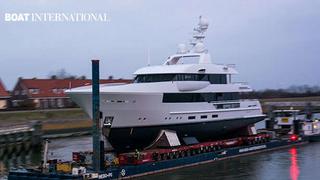 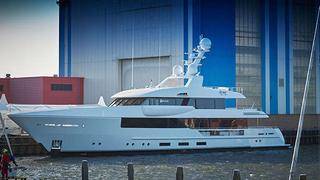 Dutch superyacht builder Feadship launched its latest creation, a 44.2 metre motor yacht known as Moon Sand, this April, and now the superyacht has been making moves on her sea trials in the video below. Moon Sand is seen below reaching high speeds and taking turns as she puts her performance capabilities to the test.

The new superyacht was launched Tuesday afternoon, April 7, 2015 at the Feadship Koninklijke De Vries Scheepsbouw yard in Makkum, The Netherlands. She was later spotted being transported through the locks as seen in the photo below.

Constructed with a steel hull and aluminium superstructure, Moon Sand is powered by twin Caterpillar engines. She will welcome eight guests in three sizable staterooms. Her owner’s suite boasts a study, his-and-hers bathroom and walk-in closet.

Feadship hull No 690, Moon Sand features naval architecture and exterior styling by the builder’s in house De Voogt Naval Architects, while the interior design comes from the drawing boards of London based Bannenberg & Rowell Design.

Bannenberg & Rowell have previously collaborated with Feadship on the interiors of the iconic 72m Predator, 39 metre Kathleen Anne, and they also worked on the refit of the 51 metre Feadship Illusion.

Next up from Feadship and Bannenberg & Rowell is a 70 metre superyacht that was revealed last year, currently in build at the Dutch yard. The steel and aluminium motor yacht is due to launch in 2016.

Feadship has had a busy year in launches in 2015, so far welcoming the highly environmentally friendly 83.5 metre Savannah, the 46m Kiss, and its largest-ever superyacht, 101m project 808, Symphony.

6 signs you're addicted to building superyachts