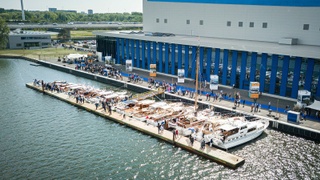 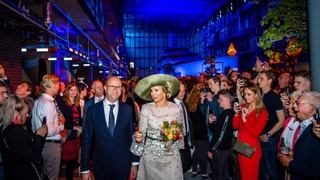 The new facility, which measures a total of 425,000 cubic metres, even gained the royal stamp of approval as Queen Máxima of the Netherlands opened the site on May 16.

The unveiling of the builder’s second Royal Van Lent yard comes after five years of planning, design and construction.

It will now be used to build and refit Feadship superyachts measuring up to 160 metres and has already welcomed its first yacht.

The in-build 88.38 metre superyacht Project 816 was moved to the new facility for completion just two days before its official opening.

The yard’s eco credentials, which led Feadship to declare it “the most eco-friendly superyacht yard in the world”, are demonstrated in its energy efficiency, specifically its district heating and LED lighting.

The main building roof is also covered in over 2000 solar panels, which are estimated to generate 550,000 kWh of energy every year.

Key features of the new facility will include a 160 metre hall for the construction of new-build projects as well as superyacht refits. The Amsterdam site will be Feadship’s fourth in total and the second to be operated by Royal Van Lent, which will continue to run the Kaag Island yard. The two premises will share the same management team and 450-strong workforce.

Despite the size of the new facility chief executive of Royal Van Lent, Jan-Bart Verkuyl said the intent is not to build a 160 metre yacht immediately. "We will take gradual steps up so we can still deliver the quality that we are known for," he said.

However, it was the size of yachts that prompted the move. "It was very clear that the boats were getting bigger," he said. "We looked for a long time for what the best location was" and ultimately decided for Amsterdam, which he described as "one of the sexiest cities in Europe."

“This new facility will allow Feadship to stay at the cutting edge of innovation and continue to build superyachts that will change history,” group managing director of Royal Van Lent owner LVMH Toni Belloni said at the event.

Sustainability is a big goal for Feadship in general Feadship Marketing and Brank Director Farouk Nefzi said, with a multiprong approach to reducing the company's footprint even as superyachts grow larger. "if we are going to have a strategic ambition, it should not be only the product, it should be the whole process."