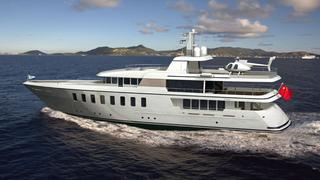 Back in February we reported that Feadship was trying to tap into the Asian market by sending its F45 Vantage Helix on a tour there, and it seems to have done the trick as the Dutch builder has just announced the sale of the 6th hull in the series to a Chinese client.

Currently under construction at Royal Van Lent, the yacht is now being reconfigured to include a helicopter landing pad at the client's request. Comments marketing manager Francis Vermeer, 'The sale follows a highly successful visit by the Feadship F45 Helix to the Hainan Rendezvous in April, where we welcomed many interested parties on board.'

Due for delivery before the Chinese New Year in 2013, the F45 has naval architecture by De Voogt Naval Architects. An interior by Bannenberg & Rowell and Sinot Yacht Design will accommodate 10 guests in five staterooms and twin 1,055hp MTU engines will give her a cruising speed of 14.5 knots and a transatlantic range.