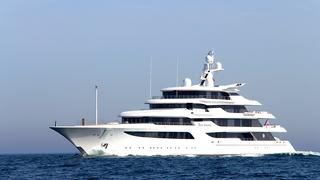 New photos of Feadship superyacht Royal Romance on her maiden voyage shows dolphins playing in the yacht's bow wake. You might have to look closely to see the dolphins jumping off the bow, their diminutive size compared to the massive 92.5 metre superyacht only highlighting how big Royal Romance really is.

Royal Romance’s build was shrouded in secrecy, but after her launch, exterior details were seen in the light of day in photos of the yacht heading out to her sea trials. Now Royal Romance has been delivered, and new photos of Royal Romance heading out on her maiden voyage show off her beautiful form even more.

Lloyd’s registered and MCA compliant, Feadship’s Royal Romance boasts a pool that measures 12 metres long by four metres wide and 1.4 metres deep, which can be emptied in under three minutes. The pool flows into a waterfall, cascading over the transom, which is partially constructed of LED-lit glass. The yacht’s exterior light plan includes lighting up this waterfall feature.

With a gross tonnage of 2,900, she has spacious accommodation for 14 guests and 22 crew members. Seymour Diamond designed the interior, while Feadship’s in-house team was responsible for the yacht’s exterior styling and naval architecture.