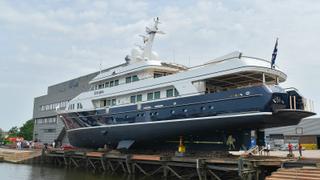 The 46.63 metre classic motor yacht Charisma has been relauched in the Netherlands bearing the new name Explora following an extensive refit at Balk Shipyard.

Built by Feadship to a De Voogt design and delivered in 1985, Charisma was sold in September 2016 and her new owner has overseen a wide range of upgrades, the most notable of which is her new dark blue hull finish and white waterline stripe.

Following post-refit sea trials, she will head north for next month's handover, as her owner plans to use her to explore the coast of Norway, Latvia and Russia this summer.

Accommodation on board Explora is for 10 guests split between a master suite, three doubles and a twin cabin, all styled by Leonard Melse, Donald Starkey and Andrew Sheinman. The crew quarters allow for a staff of up to 11 people, while a davit crane provides upper deck tender storage.

Formerly a successful yacht for charter in both the Caribbean and Mediterranean, she is Lloyd’s Registry and MCA compliant. Her full displacement hull supports an aluminium superstructure and three decks for a total interior volume of 419GT.

Power comes from a pair of General Motors 12V149N diesel engines for a top speed of 14 knots, while her total fuel capacity of 62,500 litres means that Explora can cruise for up to 3,500 nautical miles at 12 knots before needing to fill up.

She is the seventh superyacht to be refitted at Balk Shipyard in the past two seasons, with other significant examples including the 45 metre Abeking & Rasmussen yacht Bravado, which was relaunched in July 2016.