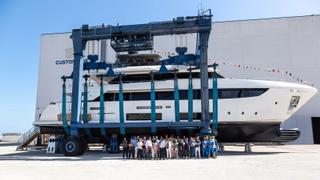 Italian builder Custom Line has launched the fifth hull in its Navetta 33 series at the Ferretti Group’s yard in Ancona, Italy.

The 33 metre superyacht was custom-built for a North American buyer, who said he will “take it for a spin” on a Mediterranean cruise with his family before returning across the Atlantic.

The first Navetta 33, World Superyacht Award winner Telli, was built for Ferretti Group CEO Alberto Galassi and debuted in the summer of 2017. Since then the series has proven hugely popular with hull number 10 set to launch in 2019.

Her exterior was designed by Zuccon International Project while Ferretti Group Engineering Department was responsible for the interior. Accommodation is for up to 10 guests in a wide master suite forward on the main deck, and four guest cabins on the lower deck.

The Custom Line Navetta 33 features a bulbous bow for greater stability and seaworthiness, while the maximum range of 2,000 nautical miles means that owners can look forward to extended cruises around the Mediterranean and beyond.

Recent launches from Custom Line include the fifth Navetta 37, and the first Navetta 42, it's new flagship which will debut at Cannes Yachting Festival 2018.