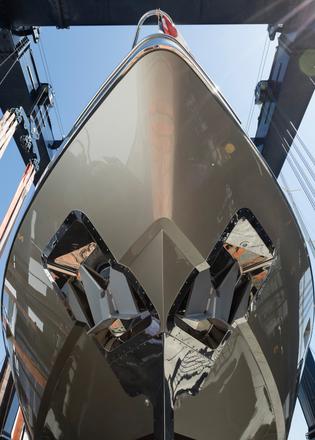 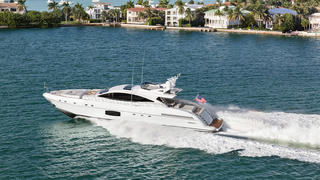 Overmarine has launched the fifth hull in its Mangusta 94 series, which will be delivered to North America later this year sporting an interior by UK-based studio Winch Design.

Built from a GRP hull and superstructure to an in-house design, this 28.72 metre fast planing yacht has an estimated top speed of more than 36 knots. The yard pointed out that it has now launched seven yachts for the American market in the past five years, and revealed that its pipeline includes an eighth yacht bound for the US.

Speaking shortly after the yacht was sold in May 2017, Francesco Frediani, commercial director at Overmarine, said: “American customers see in Mangusta yachts a functional set up and quality engineering technology beyond their sheer beauty.”

The yard added that a key aspect of this appeal lies in the use of the Rolls-Royce KaMeWa waterjet propulsion system, which keeps the draft down to just 1.6 metres and allows Mangusta 94 owners to navigate shallow bays and remote anchorages.

Accommodation is for up to six guests split between three cabins, while the crew quarters allows for a staff of up to four people. Al fresco relaxation options include a compact superyacht sundeck and a spacious aft deck, complete with sunpads and an adjacent dinette.

On-board comfort will be taken care of by a pair of gyroscopic stabilisers, which ensure a smooth cruising experience, both underway and at anchor. Power will come from a pair of 2,600hp MTU 16V2000 M96L engines, while the total fuel capacity of 8,800 litres should allow for extended coastal cruises.

Other superyacht projects currently under development at the Italian yard include the flagship Mangusta Gransport 54, which is due to hit the water before the end of the year.