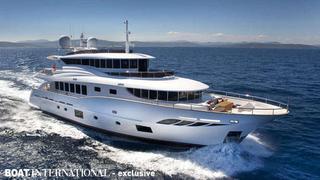 Italian yacht builder Filippetti has released exclusive running shot images to Boat International of its newly launched Navetta 30 superyacht, named Gatsby, which is set to make its debut at the Cannes Yachting Festival.

The standard version of the tri-deck 30.4 metre yacht comes with five cabins, but the very first model is a customised six-cabin version. An extra cabin was installed at the owner's insistence, who wanted to accommodate a large amount of guests and which Filippetti says exemplifies its 'any request' approach.

Volume is set to be impressive thanks to the yacht's steep design, which will also guarantee exceptional views through large wraparound windows, especially in the main deck owner's cabin. Contemporary is the word given to the interior of the Navetta 30, with extensive use of American walnut and ivory leather creating a muted, calm finish.

The new yacht fits into Filippetti's Green Series, following the Navetta 26 launched in 2010, and the focus is on reducing emissions and fuel consumption. Power comes from twin 885hp C18 CATs driving shafts, offering a top speed of 17 knots and a cruise of 13. Range at 10 knots is said to be an impressive 4,000 nautical miles.