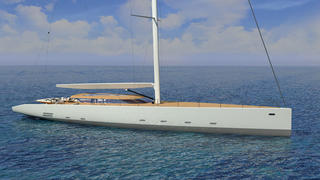 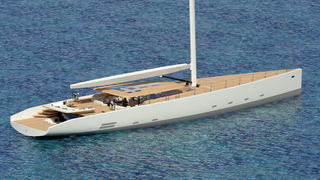 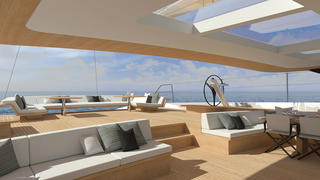 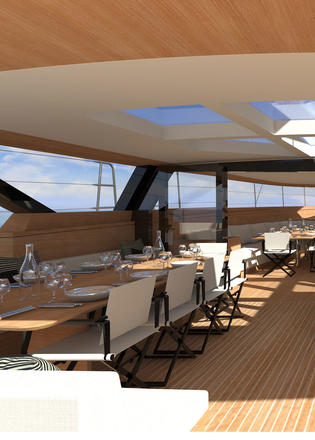 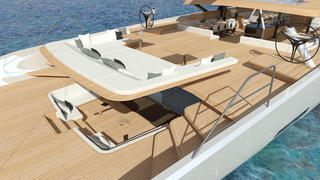 Wally has revealed the first details of its upcoming 44.2 metre yacht, the Wally 145. Developed in collaboration with German Frers, this single-masted sailing yacht will be launched in May 2019.

Luca Bassani, founder and president of Wally, explained that the Wally 145 "epitomises our credo of uncompromised performance combined with timeless appeal and providing the owners with the pleasure of truly sailing in any wind condition, from the very light to the strong airs, in complete comfort”.

Wally will work with Droulers Architects and Studio Sculli to create the interior decor for the Wally 145. Accommodation is for ten guests, split between an owner’s suite with two double rooms, and two twin cabins with pullman berths. Meanwhile, the crew quarters allows for a staff of up to eight people.

The deck layout places a strong emphasis on exterior relaxation, with the saloon and cockpit all on the same level. A private owner’s cockpit is situated on a separate level aft — a feature that Bassani describes as a “world first”.

Take a closer look at the Wally 145

The Wally 145 will be fitted with a Southern Spars mast and boom flying North sails, while auxiliary power will come from a pair of MAN D2676LE425 engines for a top speed of 15 knots. Silent cruising will also be possible thanks to a hybrid propulsion system based on DC Bus and lithium batteries.

Wally’s new partner Persico Marine will handle the construction of the Wally 145, working to RINA standards at its Massa Carrara facility. Marcello Persico, CEO of Persico Marine, added: “We are sure that this mega yacht will raise the bar of the yachting industry.”

Other Wally yachts currently under development include the fourth Wallycento and the Wally 93, which are due to launch in June 2017 and spring 2018 respectively.