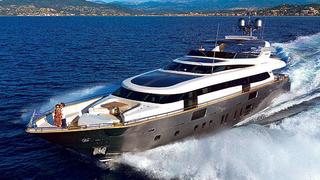 Canados has released the first official interior pictures of the new 32.7m Canados 108 motor yacht, which debuted at the latest Festival de la Plaisance in Cannes.

Christened M&A’s, this new Canados was developed on the Canados 120 series introduced in 2012 with Far Away, and followed by Friendship in 2013. Like her flagship sisters, she has naval architecture and an exterior design by the in-house team.

This time large opening balconies are replaced by large side windows in the hull on the side decks to allow more light to flow into the main deck to the dining room and the owners’ stateroom. Special features also include side sofas on the foredeck.

The full custom interior was designed by Cristiano Gatto. The result is a contemporary and light ambiance thanks to a choice of light oak for the walls and furnishings, bamboo frames, teak flooring and fabrics by Loro Piana.

The owners’ stateroom is forward on the main deck affording excellent views. Six guests are accommodated on the lower deck in a full-beam VIP, a double which can be converted into a twin, and a twin.