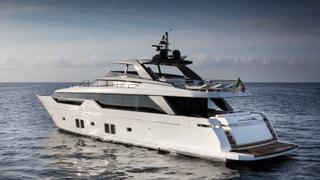 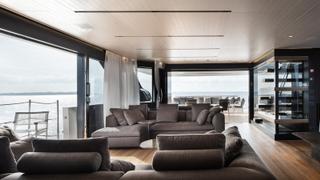 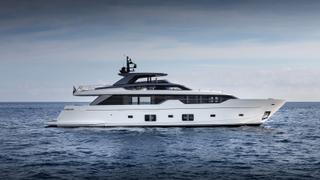 Italian yard Sanlorenzo has revealed the first look photos of the first hull in its SL102 “asymmetric” series.

The yard revealed the photos at the Cannes Yachting Festival, where the model is receiving its worldwide debut after being unveiled at the yard’s Elite Days client weekend in May.

The 31.1 metre model was created in collaboration with American designer Chris Bangle and developed with Zuccon International Studio.

The yacht sports a wide body design, with the single side deck matched on the opposite side and the boat’s guest accommodation lining up with the bulkhead. This arrangement expands the living area by around 25 square metres and allows for larger windows. Balconies are also an option in the customisable layout.

The master cabin is positioned forward and is accessible via a side door on the single side deck. An optional deployable gate, which prevents access at chosen times and maximises privacy, is also available.

Brother and sister team Bernardo and Martina Zuccon, of the eponymous design house, were tasked with transforming Bangle’s idea into a practical boat design. But the greatest challenge was preserving the Sanlorenzo DNA in such an innovative design.

“The real challenge was not to change the history and tradition of Sanlorenzo by making a mark, but to respect the strong image of the brand and its yachts, innovating without losing its identity,” Bernardo said.

“The other great challenge was to hide the asymmetry. If we had revealed it, that is, made it visible and obvious, we would have gone against the perfect balance of Sanlorenzo's family feeling. To achieve it, it took the courage that only Massimo Perotti (Sanlorenzo chief executive) could express".

The SL102 is a typical planing hull with a selection of engines, either the twin 16V MTU M86 or M96, for a top speed of around 28-29 knots. Its cruising speed meanwhile will stand at around 25 knots.

Several different layouts are available, but the core design places the owner’s suite on the main deck, with the remaining four guest cabins below. The crew area meanwhile, which accommodates a staff of four in two twin bunk cabins and a mess, is situated forward on the lower deck. The dining area and saloon are positioned on the portside.