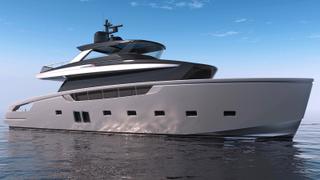 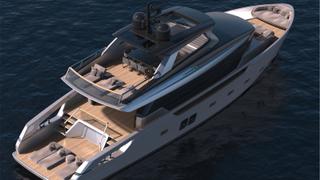 Sanlorenzo has presented a new design in its crossover SX line, the SX72 motor yacht. Sanlorenzo’s CEO Massimo “Max” Perotti describes the previous SX88 series as a “fantastic success”, so it should come as no surprise that the Italian builder is following through with another model. The SX72 Crossover Yacht, currently under construction, will be presented at the Cannes boat show in September.

The idea behind the crossover series, which stems from an original idea by Sanlorenzo’s design development manager Luca Santella, is to blend characteristics of a small explorer yacht and a yacht with a flybridge, although the final product looks like none of the existing yachts in either category and stands on its own with its very original lines and interior space use.

The SX72, with an exterior by Zuccon International Project, continues the collaboration that Sanlorenzo began with Italian architecture and design firm Studio Lissoni of Milan.

Lissoni is more specifically responsible for the idea of an open loft design that characterises the interior of the new series, which is also distinguished by its vast open aft deck cascading to sea level – an area able to store toys or to serve as an attractive lounge space just a few centimetres above sea level.

Very similar in its exterior appearance to the current flagship, the smaller SX72 also features an eye-catching feature on the inside, a spectacular central staircase in the middle of an open space full of light.

The creator of this sculptural piece is architect Piero Lissoni who offers a very different opinion than most about what spaces on a boat should look like. His idea for an open plan layout, implemented on the SX88, rose a few eyebrows at first, but it did not stop the SX88 from being quite successful. As of early May, the builder had sold 13 of them since unveiling the project in 2017.

The new SX72 will be made available in several possible interior layouts, which includes one with an enclosed galley for those who insist on it. As conceived by Lissoni, however, the whole main deck is one continuous living area with standalone furniture where the staircase is the sculptural centrepiece of a bright and simple interior.

The stairs lead to the top deck where the wheelhouse, is located, and to the lower deck where a nice lounge can be transformed into an additional cabin as needed. The yacht already has four permanent cabins, an owner’s suite amidships, a VIP on the forward end of the lower deck and two guest cabins on the starboard side.

Perotti describe the stairs as “a piece of art” that was not easy for Sanlorenzo’s engineers to realise. It is easier to understand the complexity of this one feature when considering the boat’s dimensions: the SX72 is 23.25 metres long and 6.6 metres at its widest.

These dimensions yield a sea terrace and toy carrying platform with integrated crane that spans an impressive 18 square metres. Forward of the superstructure is an outdoor lounge area that can be converted for lunch or dinner or used for sunbathing. The flybridge is wrapped forward with a permanent windshield and can be further protected from the elements with the addition of temporary Strataglass panels.

On the performance end of things, powered by two Volvo Penta IPS 1050 engines, the SX72 should reach a top speed of 22 knots and cruise at 20 knots. American designer Lou Bodega took care of the underwater lines. The yacht is built in composite with a carbon superstructure.

The first SX72 presented in Cannes will be shown with the open plan and light hued décor devised by Lissoni whose role within Sanlorenzo is expanding. He will help define the company’s overall branding, in addition to helping redesign the production sites in La Spezia, home of the superyacht division, and Ameglia, the historic home of Sanlorenzo, which celebrated its 60th anniversary this year.