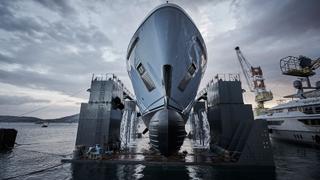 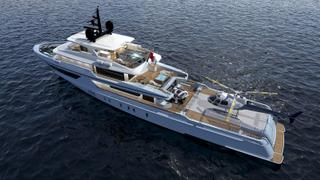 Sanlorenzo has launched its first 500 EXP, based on its growing line of explorers in steel. Painted a light blue colour, the customised explorer yacht was fitted with a helipad, which warranted the yard revisiting its existing platform.

With a length of 47.2 metres overall, it represents an evolution of the 460 EXP with exterior styling by Francesco Pazkowski, and it was reconfigured and extended to accommodate the client’s specific wishes. One of the significant changes was the addition of a helipad, which was very important to the owners in order for them to meet their boat in far-flung destinations from a home base.

Called the 500EXP in reference to her gross tonnage of 500GT, the explorer also has the ability to carry a few more toys than her predecessor, including a tender of up to seven metres in a garage.

The 500 EXP was floated in La Spezia after a Buddhist ceremony took place, which was followed by a more traditional blessing. All of this was in concert with Sanlorenzo’s Elite Days, on May 6, and the launch coincided with Sanlorenzo’s 60th anniversary celebrations.

The owner’s family attended the ceremony, surrounded by some 700 of the Italian builder’s guests, but the owner’s name, as well as the name of the yacht, is being withdrawn out of respect for their wish for privacy.

The new yacht is still to undergo sea trials but, powered by MTU 8V 4000 M63 engines, she is expected to reach a top speed of 16 knots when required.

More explorers are under construction at the Italian yacht builder. Earlier this year, Sanlorenzo launched the fourth hull of the 460 EXP, known as Hull 128. The first of Sanlorenzo’s explorers, delivered in 2016 and named Moka, has recently been listed for sale.

The Superyacht division, based in La Spezia, is also currently building a 64 metre yacht in steel and aluminium.