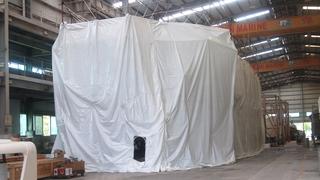 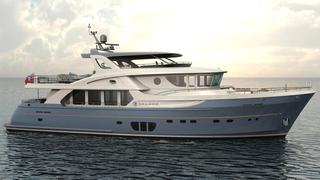 The first Selene 92 has been launched and is scheduled for a prompt delivery to its owner, who will sail the explorer yacht to the US Pacific Northwest and cruise British Columbia, Canada at the end of this summer.

The 27.93 metre Selene Explorer 92 motor yacht is built by Chinese yard Jet Tern Marine. She's their first yacht over 24 metres LOA and, following her launch, is now the flagship yacht.

The interior design, also by de Groot, is described as having a “modern yet classic sensibility.” While the interior is yet to be seen on the new launch Selene 92, the builder reports she has a gourmet kitchen, a spa on the flybridge deck and four spacious guest cabins in addition to an owner’s suite.

The newly launched Selene 92 employs a traditional displacement hull but is constructed in GRP. Powered by twin economical 660hp Caterpillar C-12 engines and boasting a fuel capacity of 7,000 gallons, she is designed for long range, blue water cruising, with a range of 1,900 nautical miles and a cruising speed of 12 knots.

In January 2014, the deck was fitted, completing the hull building process and readying the Selene 92 for launch. The order for the superyacht was signed during the 2010 Cannes boat show by Jet Tern Marine, manufacturer of Selene Yachts.

Jet Tern also announced that there are orders for two new Selene Explorer 103 class superyachts, which are scheduled for delivery in 2016 and 2017.

9 days cruising around British Columbia on a luxury yacht