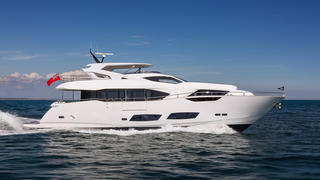 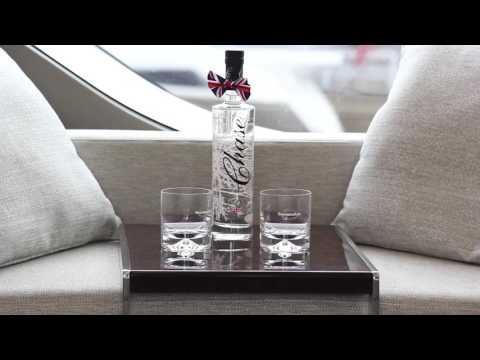 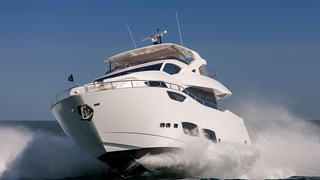 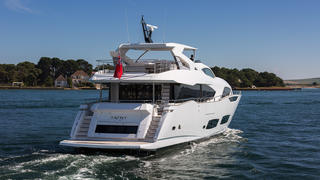 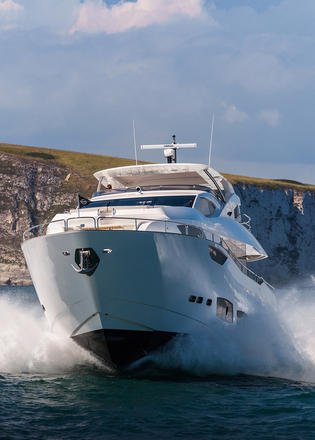 The first model in the Sunseeker 95 Yacht series has been delivered to her owner, with five more currently under construction, the Poole-based yard has announced.

Styled in-house by the Sunseeker International team and measuring in at 28.96 metres LOA, the 95 Yacht features a raised pilothouse design with a unique raised master stateroom that sets it apart from its sisters in the Sunseeker fleet.

The Sunseeker 95 Yacht builds on the successful Sunseeker 28 metre model. While the 28 metre has a traditional single deck layout, the new 95 Yacht boasts a unique main deck layout with a raised master cabin set forward that is connected to a mid-level dressing area and sumptuous en-suite by a staircase.

The remaining guest accommodation is split between a VIP, twin cabin and double cabin for a total of eight berths, while the crew quarters allow for a staff of up to four.

The 95 is certainly a yacht that makes the best use of the space available, as Sunseeker's sales director Sean Robertson explains: "We took a smaller package and re-focused the superstructure so we have the master on the main deck forward connected to the en suite below — it's like a duplex apartment. That, combined with the raised pilothouse, creates something quite unique in that size range," he says. "It's the right price point, the right size."

Robertson notes that many existing 28 metre owners are looking to step over to the new 95 Yacht rather than up to a larger yacht because the new design hits the right notes.

Take a closer look at the first Sunseeker 95 Yacht

Performance is as sporty as you would expect from a Sunseeker superyacht, with the fast-planing hull designed to hit a top speed of 29 knots and cruise comfortably at 24 knots.

Sunseeker International adds that it has sold nine models in the 95 Yacht series within a year of announcing the design at the 2015 Cannes Yachting Festival.

Having recently delivered its 100th yacht over 30 metres, Sunseeker has a strong order book with hull number five in the 131 Yacht series due to be launched before the end of the year.