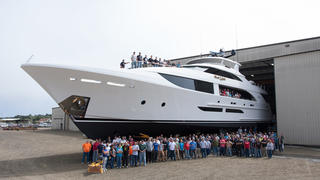 The first all-new model from Westport Yachts in seven years has been launched at the American yard and named Black Gold.

Built from GRP for a repeat Westport customer who traded up from a Westport 112, Black Gold is the first hull in the Westport 125 series. She features a semi-displacement GRP hull and measures in at 38.1 metres LOA.

Westport is renowned for its long-running series — for example hull number 55 in the Westport 112 series was launched last year — so any new design from the Washington state yard is greeted with much fanfare.

The Westport 125 has been in development since late 2014 and features a full-beam main deck master suite and contemporary interior décor as created by the in-house design team.

Accommodation is for 10 guests split across five cabins, including two double cabins and two twins, while the crew quarters are suitable for a staff of up to five.

Alex Rogers, director of sales at Westport, said: “This particular launch makes us feel very proud because it is the new flagship in the series, and our most advanced yacht built to date.”

Black Gold is currently undergoing her pre-delivery sea trials and will go on display later this year at the 2016 Fort Lauderdale Boat Show.