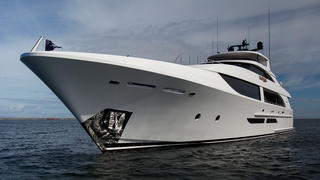 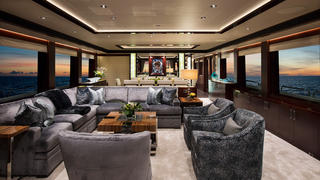 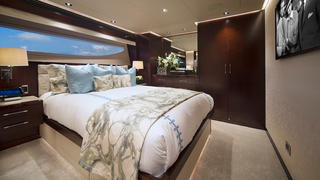 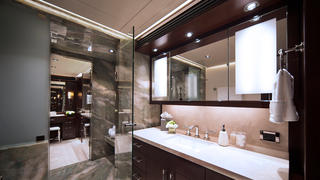 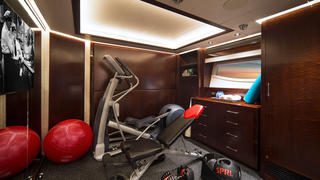 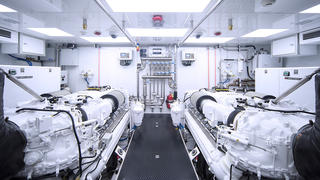 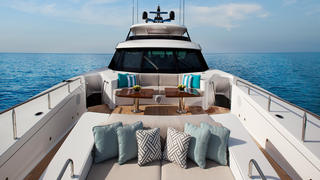 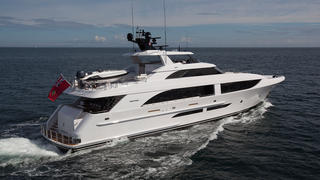 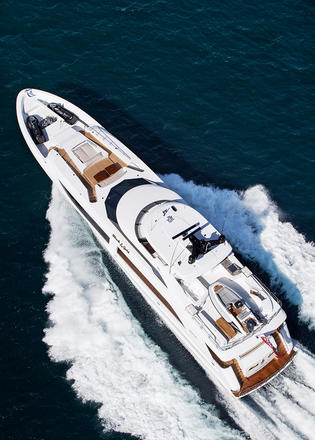 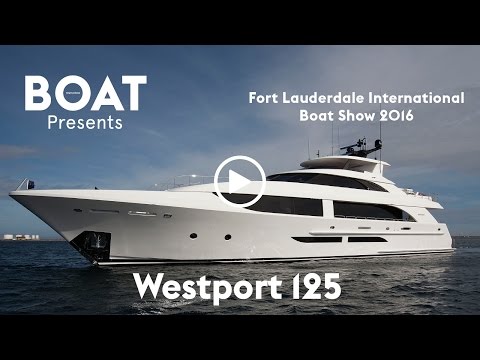 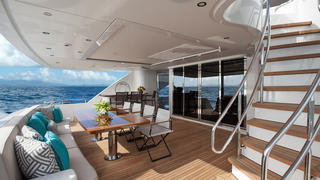 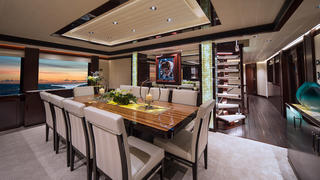 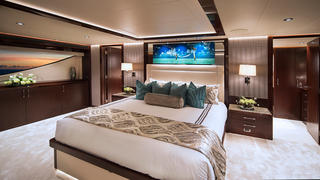 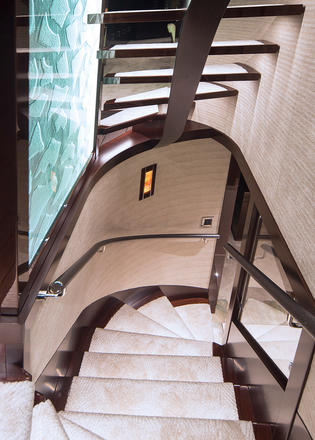 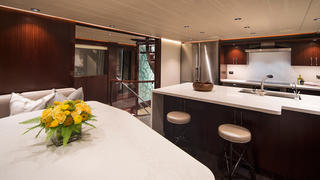 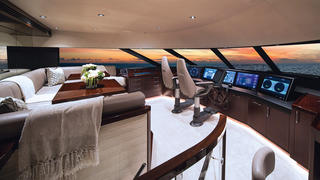 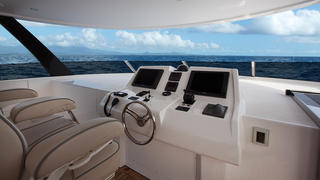 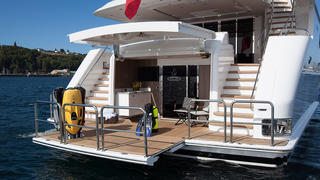 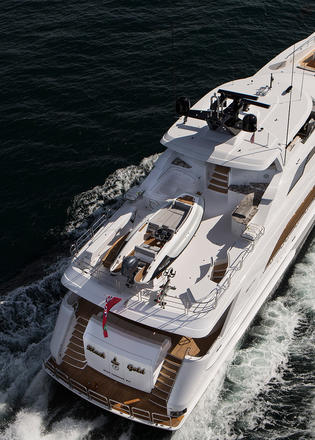 Westport dubs its new 38 metre raised pilothouse yacht Black Gold the “next generation”, and certainly the amazing glass bridge would look at home on the Starship Enterprise. It’s a showpiece, but the other equally impressive innovations throughout are harder to spot at first glance.

In contrast to other semi-custom builders who use product development budgets to regularly launch new models, Westport tends to stay with what’s proven to work and sell. A couple of years ago, it responded to the market contraction by paring back its production to focus on three of its bestsellers, which range from 34 to 50 metres.

The yard operates as a well-oiled machine. Every few weeks, a new composite hull pops out of the mould, whether or not an owner has bought it. The yachts’ interiors, built in-house in a carpentry workshop near the main facility in Port Angeles, Washington, are as diverse as the tastes of the clientele.

But for the exterior styling, the colour of choice is what the yard calls “Westport white” – also known as Alexseal’s Snow White. And underneath it all, it’s the same engineering, equipment (MTU engines almost exclusively) and construction.

It’s worked well so far. At Yachts Miami Beach in February, Westport exhibited Hull No 56 of the revamped Westport 112 and Hull No 14 of the Westport 40 metre (the 2009 iteration of the hugely successful Westport 130, first launched in 2001).

Given all this, the advent of another Westport is a big event. The yacht’s design and engineering team went back to the drawing board to create its first genuinely new model since 2009, assisted in this process, financially and technically, by the yard’s new ownership group.

Several months of quiet and intense gestation preceded the announcement of the Westport 125 in late 2014. Black Gold, the first hull, splashed in Port Angeles in August 2016, attracting the kind of attention Star Trek fans reserve for new instalments of the franchise.

The styling won’t be a huge shock. In typical fashion, the yard did not go for a radical change that may alienate its loyal following or make it difficult to sell when it is built on spec — although Black Gold was built for a repeat client. It is sporty, clean and familiar but with a twist.

“We wanted a more modern look,” says Daryl Wakefield, Westport’s president. “It’s time.” A discreet radar mast and domes, painted black, top off the yacht. Black Gold is also quite innovative, from the first ever slide-out swim platform (a co-production with Nautical Structures) to the huge upper saloon/pilothouse with its professional bridge. There is also a great deal of exterior real estate for a 38 metre with an eight metre beam.

One of the ways that Black Gold’s designers found extra space was to forgo any support columns between aft decks, an engineering feat that also contributes to the yacht’s good looks. The structural support for the top deck is cleverly integrated in a way that provides visual continuity, creates protected side deck passages on the main deck to the elevated forward lounge and, thanks to judiciously placed frameless tempered glass, does not block the view.

Inside, Black Gold’s main deck is particularly impressive with a spacious saloon and dining area, eat-in country kitchen and, all the way forward, a master suite with a small private foyer and a spectacular en suite. Wakefield says the country galley and main deck master suite are very much in demand with Westport owners. They’d tried it on the 112, but it was a bit too much of a compromise.

Making it happen within a moderate hull length was one of the goals Westport wanted to achieve with Black Gold. The extra length, the raised pilothouse design and moving the house a little forward did the trick.

Black Gold is an impressive example of what can be done on the inside of the 125. Except for a couple of tweaks, the owners chose to go with the standard layout and worked with Westport’s interior design team on colour, furniture and material selection. Great headroom, ubiquitous windows and a judicious use of glass really make the interior décor shine.

The space is wide open with everything utilitarian, including the Panamax TV system, well hidden within low stylish cabinets. Dark parquet flooring with stainless steel accents replaces the carpet forward, leading to a superyacht staircase and the entrance to Black Gold’s galley and the owners’ suite beyond that.

The galley is an integral part of the main deck with the same flooring and superb finishes. A door, in frosted glass, opens at the push of a button or the tap of a toe on a sensor near the floor (handy for a server carrying a tray of glasses). It reveals a centre island/bar in stunning white granite, stainless steel appliances, and a banquette surrounding a large table.

From inside the galley, stairs lead to the crew area on the lower deck, which includes a good-sized mess and three cabins. Even the top bunks are spacious and all cabins have an en suite and are finished with care. “It’s Westport standards,” says Wakefield.

A door leads directly from the crew area to the guest cabins, which is handy for unobtrusive and prompt service. On Black Gold, one of these was finished with rubber flooring to accommodate gym equipment, and is equipped with Pullman beds, at the owner's request.

Elegant stairs wind their way up to the superyacht wheelhouse. The size, views and the eye-catching glass bridge by Marine Technologies, an American company that supplies the offshore industry (and now a sister company to Westport), make it an attractive multifunctional space. The six Hatteland Display touchscreens can show all functions interchangeably, and the captain’s helm chair is equipped with an additional touchscreen.

A sofa upholstered in greige leather from Holly Hunt is a great spot from which to watch the action and almost guarantees the captain will have company on passages. “You could have 12 people here,” says Greg Gaus, Black Gold’s experienced captain.

Gaus has had a chance to really test the yacht. The shakedown cruise was from Port Angeles to Victoria, Canada, and by the time he docked in Florida last October for the Fort Lauderdale International Boat Show, he had already put 6,000 miles on Black Gold’s engines. With a little assistance from Westport, he has become more than accustomed to the novel bridge set-up.

“It actually will be hard to go back,” he says. Occasionally, while cruising off the coast of Mexico, he ran Black Gold from the flybridge, enjoying its great views and fresh air.

Aside from the bridge, another favourite area for guests is the new swim platform and superyacht beach club. The transom door opens upward and the platform, operated by a hydraulic system, slides out. And just like that, the beach club is open — a full entertainment area with television and stereo.

The door provides shade, and a stainless pole that clips into a receiver in the deck connects to the water for a shower. Inside, nicely finished doors cover utilitarian spaces, so it feels and looks like a guest area.

It took quite a while for Westport to build its first beach club, but when it did it took a novel approach. Rick Thomas, vice-president of sales and marketing at Nautical Structures, says it was a collaboration that started with a conversation at a boat show.

“[Westport] came and talked to us about the idea of incorporating a platform that they wanted to be able to hide. They did not want it to be an obvious feature of the boat,” he says.

Motion-control hydraulics operate the hinges that lock the door in the up position, as well as actuate the beach club and its two hydraulic ladders. “We built our structure so we did not have to have support columns on the aft deck,” says Thomas. “Credit goes to Westport for the engineering of their fibreglass and carbon structures.”

Black Gold’s beach club is the first of its kind and offers real advantages. Traditionally, the transom door opens down to become an integral part of the beach club. A large door in contact with the sea rises up and down with the waves. In a heavy enough seaway, it has enough buoyancy to affect stability, says Thomas.

One way around this is to build it so the open door is far enough above the waterline, but that’s not practical on a 38 metre, he adds. With this set-up “there is no surface effect and no impact to the vessel. That’s probably one of the biggest benefits. Secondly you don’t have to have the platform out to enjoy the view.”

Other Westport firsts on Black Gold are the two gyro stabilisers (housed beneath the swim platform), which are most effective at low speeds or at anchor, according to Gaus, and work in conjunction with a fin stabilising system, very effective at higher speeds.

Finally, although the entire transom is operated by hydraulics, to minimise noise in the master suite, Westport opted for an electric bow thruster and winches.

Jetsetter: The Dynamiq rewriting the rules of yacht buying